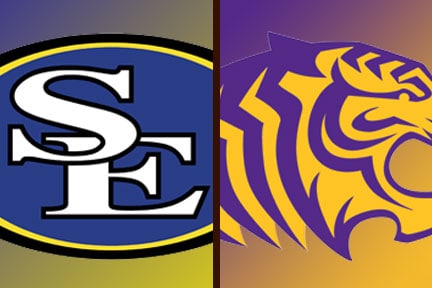 ARKADELPHIA, Ark. – Southeastern put together a furious fourth-quarter rally with 27 points with a pair of onside kick recoveries, but saw its comeback come up two points short in a 42-40 loss on Saturday night to Ouachita Baptist in Arkadelphia, Ark.

The loss drops the Savage Storm to 0-2 to start the season heading into a return on Sept. 19 when it hosts the league’s newest members in Oklahoma Baptist at 6 p.m. at Paul Laird Field.

SE headed into the final frame of the contest trailing 35-13, but narrowed that gap with 10:06 to go when Ryan Polite found Kaymon Farmer for a three-yard TD strike to close the gap to 35-20.

However, the Storm had the wind sucked out of their sails on the ensuing kickoff when the Tigers’ Ke’Vontae Pope went 90 yards on the return for the score to push the lead to 42-20 with 9:53 to play.

Southeastern was unable to get anything going on its next driven and the game looked to be getting away from them as OBU was closing in on another score at the SE 15 yard line when Nicholas Sierra sacked Austin Warford for a 12 yard loss, forcing a fumble that was scooped up by Thomas Curry who returned it 73 yards for the touchdown to make the score 42-27 with 5:13 to play. His return is the longest fumble return for a score since the Storm joined Division II.

Jake Walters would line up for the onside kick and SE would recover it at their own 44 yardline after a Tiger player touched the ball before it went the necessary 10 yards.

Polite would go right back to work, first hitting Ty Miller for a 23 yard pickup and one play later finding Franky Okafor for a 33 yard score, closing the gap to 42-34 with 4:43 to play.

SE would force an OBU punt on its next drive and takeover at its own 16 yardline, needing to drive 84 yards in 2:30 to have a chance to tie the game.

The Storm would pick apart the defense early with a pair of first downs on short passes before Polite hit Miller for a 36 yard connection to the Tiger 12 yardline. Two plays later he would find Okafor for the second time on the night from 12 yards out for the score, but the two-point conversion pass would miss the mark and leave SE down 42-40 with 31 seconds to play.

Walters would again execute the onside kick to perfection, with Chance Grayson skying for the catch on the bounce to give the Storm possession at its own 48 yardline with 31 seconds to play.

SE would pick up a first down with a 12 yard pass to Miller, but was unable to move into field goal range after Polite was sacked for a five-yard loss and the final throw of the game would be hauled in by Farmer at the OBU 36 yard line as time expired.

For the second week in-a-row the Storm outgained its opponent but still lost, this time holding a 487-to-405 edge in total offense.

Southeastern did its damage through the air as Polite turned in a 28-for-42 effort passing for 367 yards and three touchdowns, matching the 10th best single-game passing effort in school history.

Okafor was his favorite target on the night with eight catches for 115 yards and a pair of scores, while Farmer added seven catches for 58 yards and a touchdown. Miller chipped in 71 yards on three receptions, while Grayson turned in 59 yards on a pair of catches in addition to his onside kick recovery.

Ronnie Green led the Storm rushing effort which was again held to just over 100-yards of rushing as a group, finishing with 68 yards on his own with a score, while the team rushed for 120. Nelson Akinwandeadded 16 yards and a touchdown, while Polite added 30 yards rushing to his total offense numbers.

Kevin Jones, Rob Gardner and Bobby Jackson led the defense with six tackles each, while Curry was one of a group of six defenders with three tackles, while adding his 73 yard fumble return for a score. Sierra was also one of that group with three stops which included his sack and forced fumble that led to the aforementioned Curry touchdown.

The teams traded scores out of the gate with the Tigers taking an early 7-0 lead on a 43 yard Kris Oliver run, but SE answered with a five play, 31-yard drive that was capped by a seven-yard Green run, but the snap was off the mark on the ensuing PAT , leaving the score at 7-6.

OBU would add a second score in the first quarter, and the Storm would answer early in the second when Akinwande scored form three yards out to cap a 10 play, 73 yard drive and make the score 14-13.

The Tigers did their damage on the ground with 309 of its 405 yards of offense on the ground, led by 135 yards by Warford, while Kris Oliver added 92 yards and three scores and Brandon Marks chipped in 73 yards and two TD’s.

Warford was 5-of-16 through the air for 96 yards and was sacked once.