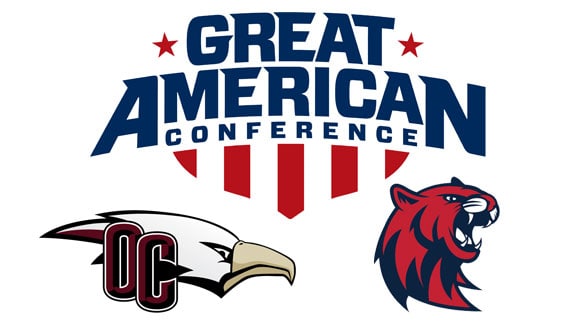 From the GAC
Eric Moyer, Associate Commissioner for Communications

RUSSELLVILLE, Ark. – With the Great American Conference adding men’s and women’s outdoor track & field in the spring of 2016, the league announced, with unanimous support of its presidents, the addition of Oklahoma Christian and Rogers State as affiliate members.

With the addition of Oklahoma Christian and Rogers State, seven schools with compete in the sport. The Eagles and Hillcats will join full members East Central, Harding, Oklahoma Baptist, Southern Arkansas and Southern Nazarene at the GAC Championships.

“We are excited to add Oklahoma Christian and Rogers State, their student-athletes, coaches, administrators and fans into the Great American Conference for track & field,” GAC Commissioner Will Prewitt said. “The addition of two more programs greatly enhances our track and field championship and we’re glad to offer the championship opportunity for our neighbors at Oklahoma Christian and Rogers State.  This relationship will be a winner for all parties involved.”

As affiliate members, student-athletes from Oklahoma Christian and Rogers State will have full eligibility to win team and individual awards at the conference meet. Additionally, both schools can participate and vote at coaches’ meetings.

“The Rogers State University Athletic Department is excited and honored to join the Great American Conference as an affiliate member in men’s and women’s track & field,” said Rogers State Director of Athletics Ryan Erwin. “I want to express my appreciation to Commissioner Will Prewitt for his guidance through the process and support of our request for affiliate membership. We also are thankful for the support provided by all the GAC institutions, their presidents, and ADs, which grants a great opportunity for our student-athletes.”

“We appreciate the Great American Conference allowing us to become an affiliate member for track & field,” said Oklahoma Christian Athletic Director Curtis Janz. “We will continue with our membership in the Heartland Conference in all our other sports and we enjoy the rivalries we’re building in that league. But now our track & field teams will have a better opportunity to compete at the Division II level and qualify for postseason events, too.”

Oklahoma Baptist will serve as the host of the GAC’s inaugural Track & Field Championships, set for May 4-6 in Shawnee.