Game One Slips Away 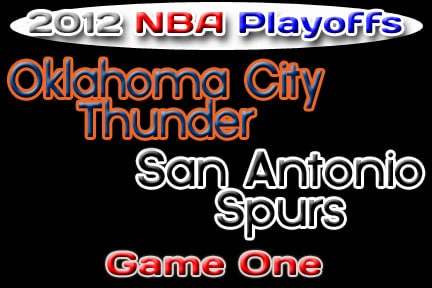 It was the matchup for everyone has been anticipating for weeks, and Game One did not disappoint.  The Spurs ended up walking away with the 101-98 win to take a 1-0 lead in the Western Conference Finals against Oklahoma City.

The Thunder started the game aggressively, but the Spurs were not about to let young OKC run away with this one.  The Spurs had a six point lead after the first quarter, but their 14 first-half turnovers led to 15 Thunder points.  A late trey by Derek Fisher allowed OKC took a one point lead into halftime.

In the third quarter, the Thunder outscored the Spurs 24-16 to extend their lead to 9 points going into the fourth quarter.  For one of the first times since the playoffs began, the Spurs were facing a real threat of ending up on the losing end.  They quickly turned things around, however, and managed to take a 10 point lead with 1:57 to play.  Things were looking bleak for the Thunder.  A few three-pointers from Westbrook and Harden put OKC within three points, but their comeback effort fell short for only the second time this postseason.

Thunder All-Star Kevin Durant led all scorers with 27 points, and he also grabbed 10 boards for a double-double.  James Harden had 19 off the bench, and Russell Westbrook contributed 17 points.  Veteran Derek Fisher put up 13 points himself, shooting 6-8 from the field.  Defensively, Thabo Sefolosha had four steals, and KD blocked three shots.  Serge Ibaka and Nick Collison each grabbed seven of the teams 43 rebounds.  OKC did not shy away from physical play either.  Four Thunder players ended up with  four or more personal fouls.

Even though the team ended up with a three-point deficit on the scoreboard, they came out ahead in several areas.  They had 13 turnovers compared to 16 for the Spurs, aided in part by the 11-5 steal advantage for the Thunder.  OKC also had the 9-2 edge in blocks, and the younger  Thunder outscored San Antonio on the fast break 17-8.  Coach Scott Brooks can remind his guys of this when they look at the tape from Game One and talk about areas for improvement.

The Western Conference Finals continues on Tuesday night at 8:00 p.m. when the Thunder and the Spurs will face off again in Game Two.