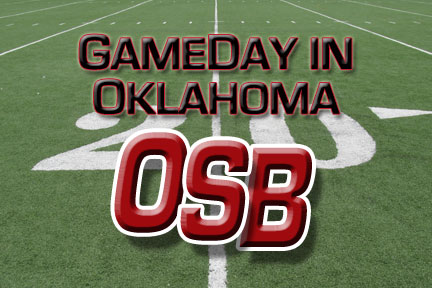 It was another week that almost saw perfection in the picks, but came up short again at 8-1 apiece.  Matt and I both fell prey to the thought that the Savage Storm would get the upset on the road.  My record is now 40-9 on the season, while my brother sits at 38-11.
Congratulations to Tulsa for beating UTEP, 33-11, to move to 6-1 on the season.
And without question we start this weekend with the Red River Rivalry.

• Oklahoma State (2-2) at Kansas (1-4) •
The two teams find themselves at the bottom of the Big 12 standings and both are looking for their first conference win.  Today’s game will be the 63rd and OSU holds a slight edge at 31-29-2, due to winning the last two.  Oklahoma State is the only team in the country to rank in the top 10 nationally in both passing offense and rushing offense.  The Cowboys have scored at least 30 points in 22 consecutive games, the nation’s longest streak.
Matt’s pick: OSU 35-14; Joey’s pick: OSU 59-21

• Southern Arkansas (4-1) at East Central (3-3) •
The Tigers won last year, 49-6, to give ECU a narrow edge in the all-time series, 7-6.  East Central’s defense smothered the Muleriders with five sacks and four interceptions.  ECU quarterback Spencer Bond is this week’s Oklahoman Player of the Week, following the Tigers’ win over Northwestern.  And as advertised at the start of the season, the ECU defense continues to roll, ranking second in the nation in sacks recorded (27) and turnovers gained (21).
Matt’s pick: SAU 31-24; Joey’s pick: ECU 35-13

• Southeastern (1-4) at Northwestern (0-6) •
Former OIC rivals meet again as conference rivals in this Great American Conference matchup.  SOSU owns the all-time series lead at 41-28-1 and won 29-9 in 2009.  It’s Homecoming at NWOSU and the Rangers are playing in Alva for the first time since Sept. 8.  Southeastern is averaging 225 ypg on the ground, while Northwestern is averaging 41.
Matt’s pick: SOSU 21-20; Joey’s pick: SOSU 31-20

• Southern Nazarene (0-6) at Kansas Wesleyan (4-2) •
The Crimson Storm have come close the last two weeks, but have fallen three points short in both games.  Southern Nazarene won the only other meeting between the two, a 52-23 victory last year.  SNU has 50 rushing yards per game; Kansas Wesleyan’s Brett Giesen is gaining 98 ypg on the ground.
Matt’s pick: KWU 24-13; Joey’s pick: KWU 28-24