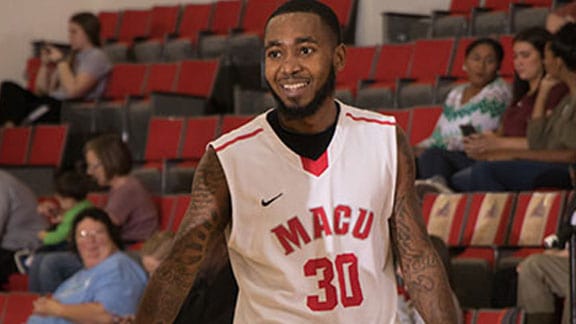 Garner didn’t waste any time warming up from the perimeter, hitting five of his nine treys in the first half, including four within the first 10 minutes of the contest.

The Eagles hung with the Evangels throughout much of the opening half, leading by as many five points on three occasions.

Threes by Keyshawn Perkins and Garner put MACU ahead for good and Devante Moore then scored seven straight points that fueled a 15-3 spurt that put the Evangels up 46-35.

With the lead at eight early in the second half, the Evangels pulled out to a commanding 72-52 lead when Jordan Rhodes scored seven points to key a 14-2 spurt.

The Eagles had one more run in them as Jeffrey Long scored six points to help the Eagles cut the lead in half with a 10-0 burst with 8:44 remaining.

But the night belonged to Garner and the Evangels as he countered with two treys and a three-point play to lead a 12-2 push that stretched the lead back to 20 at 89-69 with 7:05 left.

Garner wound up with a career-high tying 30 points on 10-of-12 shooting overall and 9-of-11 from the perimeter. Chaisson finished with 16 points and the Evangels got 10 points each from Moore and Devonse Reed.

Ex’Zavia Seaton led the Evangels with a game-high eight rebounds and Malcolm Mann had a team-best five assists.

The Evangels controlled the glass to the tune of 40-29 overall, with a 32-21 edge in defensive rebounds.

MACU will continue action at the Northern New Mexico Classic on Saturday afternoon against the University of the Southwest (N.M.) at 4 pm (CST).