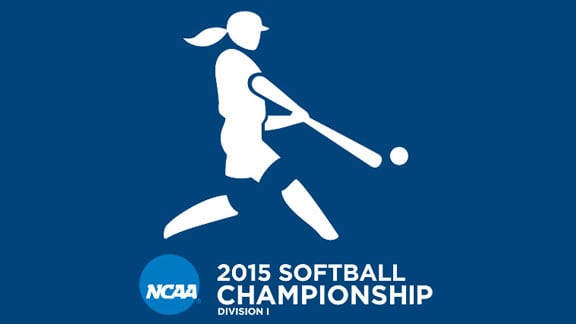 OKLAHOMA CITY, Okla. – In a rematch of Tuesday night’s contest, Lauren Haeger and Haylie Wagner squared off in the circle. Unlike the last game, however, Haeger would not be silenced, powering the Gators to a second-straight NCAA Division I Softball Championship with a 4-1 victory.

Riding a 20-inning streak without an earned run against her, Michigan set Wagner out to complete the job she started last night by blanking Florida 1-0. It took just one swing of Haeger’s bat to end that streak. A low, blooping shot to shallow center proved just enough to score Stewart. Taylor Schwarz stepped up two batters later and delivered a 2-run single to left field to push Florida’s lead to 3-0 after one inning of action.

After giving up an additional run in the bottom of the second, Wagner was relieved by Megan Betsa after just 1.1 innings of work. The sophomore hit her first two batters faced, but composedly fanned the next two batters with bases loaded to end the inning without causing more damage on the scoreboard.

The action took a lull over the next two innings as Haeger carried a no-hitter into the fifth inning. Working a full count, Tera Blanco put to bed the no-no bid with a single through to left field. She would score two batters later off an RBI single by Sierra Romero that cut Florida’s lead to 4-1. Haeger retired the next batter to get out of the inning.

With bases loaded and one out in the sixth, Wagner was trotted back out to the circle to take over where Betsa left off. She forced a foul out and a ground out to get out of the jam and give the Wolverines one last shot to tie the game up. Unfortunately for Michigan, Haeger needed just four batters in the top of the seventh to retire the Wolverines for good and give the Gators their second national championship in as many years.

Haeger went the distance, throwing a one-run complete game by allowing just five hits. Wagner saw a total of 2.0 innings of action, but gave up all four runs for her third loss of the season. In one of the stranger sights of the game, all three pitchers combined to hit nine batters.

Justine McLean lead the Gators at the plate, going 2-3 with one run scored, while Haeger went 1-1 and was intentionally walked twice. For the Wolverines, Abby Ramirez went 2-3 at the plate.

Michigan, playing in their first Women’s College World Series Final since they won the title in 2005, concluded their season with a 60-8 record. The Florida Gators posted a 60-7 record as they wrapped up the season with a second straight title while also becoming just the third team to win back-to-back national championships.