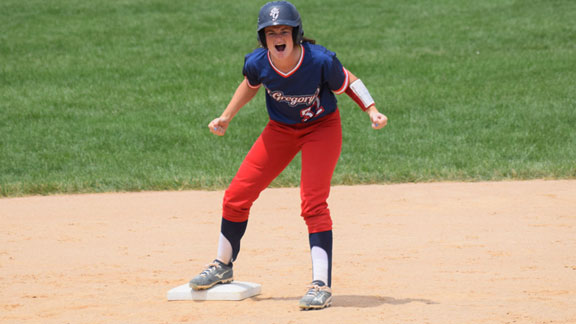 Godfrey, from Tulsa, belted three doubles in a 3-for-3 effort and drove in a pair of runs in the victory. She is now 7-for-11 with five RBIs in the tournament. Godfrey’s trio of two-baggers Monday were the most she’d hit in her 84-game career.
“I’m feeling the atmosphere and this team behind me,” said Godfrey, whose team has won two straight after dropping the tournament’s opening game. “I feel like we’ve found our step – found who we are. We are back to playing St. Gregory’s softball.”
Godfrey snapped a scoreless tie in the fourth with a two-out RBI double over the head of Marian right fielder Erica Miller. That scored Sammy Leisinger from first.
The Cavs added three more in the fifth – all with two outs. Both Leisinger and Ashli Hafford produced runs with hard-hit balls to the infield that were ruled errors. Godfrey followed with her third double – this one down the left-field line to plate Leisinger once again.
SGU pitcher Bryn Houlton, meanwhile, was on cruise control. She retired the first eight Knights she faced and held the designated visiting team to only one hit through six complete. Houlton ran into trouble in the seventh, as Marian loaded the bases with no outs following a pair of hits and a walk.
Hafford came on in relief, though, and retired the next three hitters on two strikeouts and a line out. It was Hafford’s second save of the season.
Houlton improved to 18-3, lowering her ERA to 1.90 in the process. She struck out five and walked one.