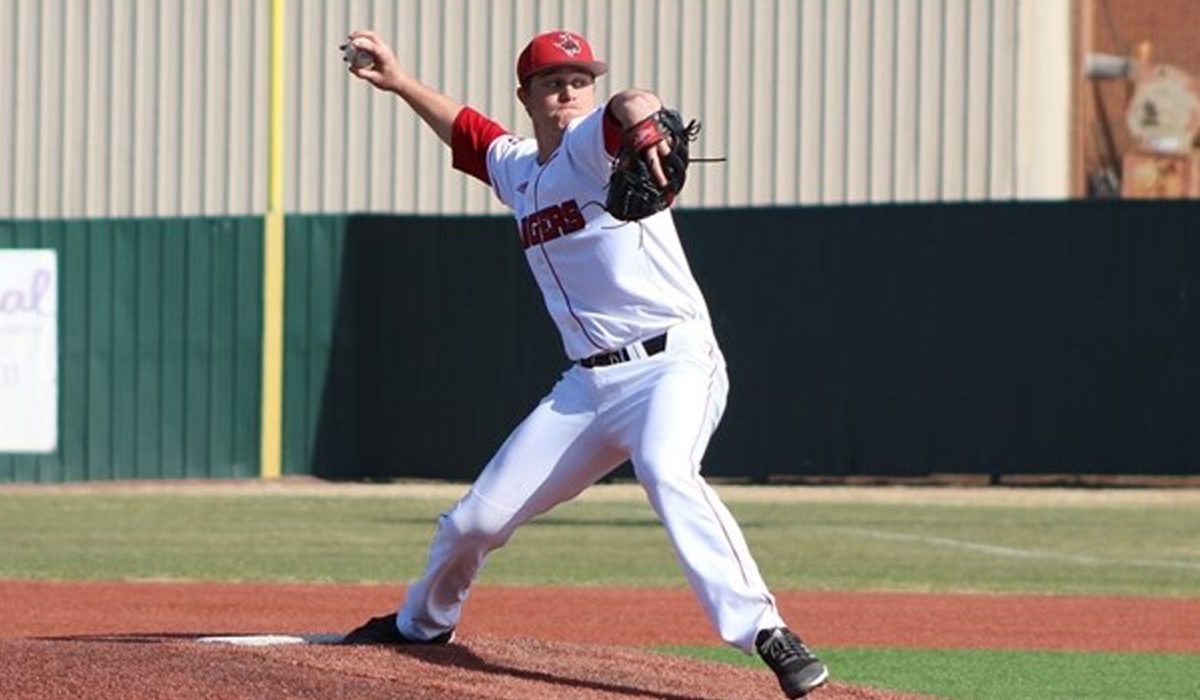 ALVA – Northwestern Oklahoma State baseball picked up a crucial Great American Conference series win over Southern Nazarene University after splitting Monday’s doubleheader at Myers Stadium. The Crimson Storm rallied for three runs in the 8th to take a 7-4 win in game one, but the Rangers bounced back in a big way as starter Matt Goertzen threw a two-hit shutout to lead the red-and-black to an 8-0 victory.

Game 1
With runs in the 2nd and 3rd innings, Southern Nazarene jumped out to an early 2-0 advantage against Ranger righty Cole Jackson. Making his eighth start of the season, Jackson was able to minimize the damage and pitch out of trouble in each of his first four frames.

Down 2-0 in the 4th, Jorin Van Amstel (3-for-4, 2B) and Justin Bundy(2B, 2 RBI) kicked things off for the Rangers as they clubbed back-to-back doubles before catcher Brendan Kates perfectly executed a squeeze bunt to cash in Bundy and tie the game up at two apiece.

The Crimson Storm got the two runs back in the 5th with two base hits, a hit batter and a run-scoring error by Johnnuelle Ponce in center field. Jackson was lifted in the inning in favor of redshirt sophomore Baron Phillips who struck out two of the first three batters he faced to get the Rangers back in the dugout.

Judah Zickafoose (2-for-4, 2B, RBI) would cross on a groundout from Bundy in the 6th to cut the deficit to just one, but a three-run 8th gave the Crimson Storm all they would need to take the second
game of the series 7-4.

Game 2
Head coach Ryan Bowen got a much-needed performance out of his game three starter as Matt Goertzen (W, 2-4) dominated the Crimson Storm lineup en route to his first complete game shutout in a Ranger uniform. The 6’3 product of Fresno, California retired the first 10 batters he faced before SNU center fielder Cole Lee hit a one-out double in the 4th.

But by that time, a hungry Ranger offense had already put up two runs and was hunting for more.

To lead off the bottom of the 4th, Jorin Van Amstel hit his fourth double of the series (his 10th of the season), but it looked as though the effort would be all for not when the next two Rangers grounded out on the infield. However, Brendan Kates kicked off a pair of two-out base hits coupled with a walk drawn by T.J. Kassner that gave Goertzen a five-run cushion to work with.

Goertzen would get three more runs of support in the contest but it was more than enough for the right hander as he would allow just one more base hit without walking a batter to earn his second win of the 2018 season.

Up Next
After weather pushed the series back two days, Northwestern will have a quick turnaround as they pack the bus to head to Goodwell, Okla. for their game tomorrow (Tuesday, April 10) against Oklahoma Panhandle State University.