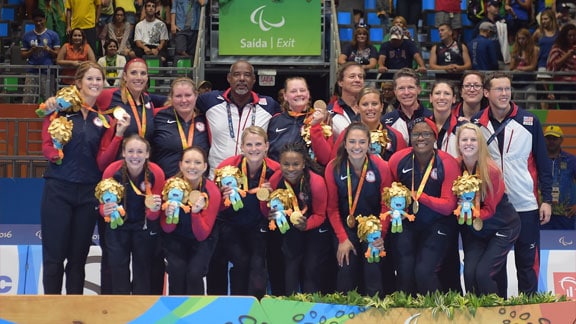 The gold medal win follows silver medals for Team USA at the 2012 and 2008 Paralympic Games, and a bronze medal at the 2004 Paralympics when women’s sitting volleyball made its debut as Paralympic sport.

“We’ve worked hard the past four years for this and the outcome just shows how hard we worked,” Monique Burkland (Ardmore, Oklahoma) said. “We just went point by point. We know they don’t give up and always come back. We’ve been in that position before where they’ve come back and won, so we knew we had to keep going at it.”

Burkland led a U.S. offense that continuously attacked, even as China struggled to find its rhythm. Burkland had a team-high 12 points (11 kills, one block). Lora Webster dominated the net with a match-high five blocks and 10 rebounds, adding one kill and one ace for seven points. Katie Holloway (Lake Stevens, Washington) (six kills, two aces), and Captain Heather Erickson (Fayetteville, North Carolina) (seven kills, one block) rounded out the leading scorers with eight points each.

“I felt great,” Webster said of her performance at the net. “I don’t like having balls go by me, especially hard hit balls. There were a couple I missed that I can learn from for the next time, but I felt great. I knew that my defense behind me was there.”

In addition to a balanced offense, the U.S. capitalized on Chinese errors while limiting its own. The team had 14 unforced errors, its lowest total of the tournament.

“We passed well, served well and our serving kept them off balance,” Head Coach Bill Hamiter said. “We followed the game plan and made great decisions on the court, and that’s all I kept telling them at time-outs.

“I’m super proud of the team and what they’ve been able to do. It’s been a gradual process. To take a win like that, there shouldn’t be any doubt in anyone’s mind that not only is this a good team, but maybe one of the best teams on the women’s side ever.”

After a convincing Set 1 win, the U.S. jumped out to a 6-0 lead in second set behind a service run by Kaleo Kanahele (Edmond, Oklahoma). The team continued push ahead, spreading the offense. China rallied at the start of Set 3, building small leads early. A Chinese attack error put the U.S. ahead 5-4 in the set and the Americans never looked back, racing ahead on a seven-point service run by Nicky Nieves (Kissimmee, Florida).

“We all could visualize the celebration. We all knew that was in the back of our minds, but how we were going to get there? We had no idea. We all climbed the mountain together,” Holloway said. “I couldn’t believe how we played. I mean, I can, but I didn’t picture it that way. It’s as pretty close to perfect as we could get.”

Since the 2008 Paralympic Games, the U.S. and China have played in five gold medal finals, including both the 2010 and 2014 World Championships. China won four of those matches; the U.S.’s single gold came earlier this year at the World ParaVolley Intercontinental Cup.

“It means the world. Having our national anthem played at the big stage is something we’ve been dreaming of since we lost at Beijing,” Erickson said. “Now that it’s a reality, it’s just crazy in my mind. It’s amazing to know we worked so hard as a team and this was the end result. It’s the icing on the cake.”