Good to the Last Shot 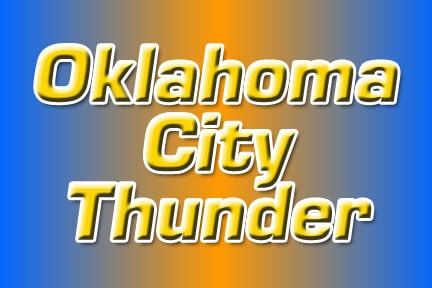 Kevin Durant elevated his status once again with a fall away three-pointer for the win with less than a second left on Thursday night.  Durant’s 29-foot fall-away jumper off the in-bound pass gave Oklahoma City a 104-104 win over the Dallas Mavericks in the Chesapeake Energy Center.  The Thunder are now 4-0 on the season.

Durant came away as the hero, but Russell Westbrook also made a big mark in the fourth quarter.  Westbrook, who had been dealing with 24 hours worth of bad press, had an impact on the final period as well.  With the score tied at 91, Westbrook grabbed a loose ball that Kendrick Perkins knocked away from Dirk Nowitski and took it the length of the court.  He was fouled by Jason Terry as he made the dunk and then put in the free throw.  He then drained a mid-range jumper on the next trip and OKC went up 96-91 and things looked like they would go the Thunder way.

As the game wound down, another Westbrook shot gave the Thunder a 101-96 lead.  But after Terry pulled the Mavs within two with a three-pointer, Serge Ibaka missed two free throws giving Dallas one last chance to tie or take the lead.

The Mavericks set up a great half court play and while Kevin Durant got sucked in on a double-team on Nowitski in the lane, Dirk passed it out to new Mav Vince Carter, who calmly nailed one outside the arc, giving Dallas a 102-101 lead with 1.4 seconds left.

That’s when Durant got his chance to shine.  The superstar had already made clutch shots on the night and had a double-double with 30 points and 11 boards.  But with just over a second left, it looked as though the stats would be just something to help the two-time scoring champion defend his crown.  The reigning NBA champs were going to show that there was still something in their tanks.

Then Durant spun out of the line on an in-bounds and, with three defenders in his face, let fly the game-winner as time expired.

Oklahoma City remains undefeated on the young season.  Dallas is yet to pick up a win in three tries.

Nowitski also had a double-double with 29 points and 10 rebounds.  And the new-look Mavs seemed to have just enough to finally get into the win column.  But this night would not be the one.

And as the game progressed, it became apparent that a rivalry is growing between the teams that is not just that of geographic proximity.  The chippiness displayed between the two finally boiled over late in the game as Carter and Serge Ibaka really started to go at one another.  The two earned technicals, which of course did nothing more than offsetting penalties in the NFL, but fueled the fire already burning in both teams.

Durant’s leadership continues to grow as the young team continues is own path of growth.  And the buzzer-beating three-pointer only adds to his legend.

Westbrook didn’t have the game of his life with only 16 points and seven turnovers.  But his fourth quarter seemed to make up for the game as a whole.  And the output was strides ahead of the previous performance.

Ibaka also tallied 16 points to go with eight rebounds and three blocks.  James Harden had 15 more in his usual role coming off the bench.

Dallas’ Terry put in 15 of the Mavs’ bench and dished out nine assists.

Oklahoma City has played their first four contest over five nights.  The Thunder will now get a night off before hosting the Phoenix Suns on New Year’s Eve.