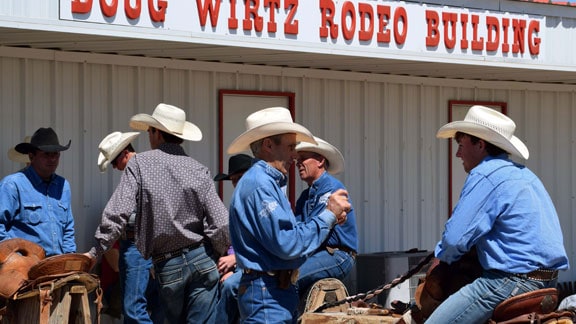 Billy Etbauer works with a student at the 2016 edition of the Deke Latham Memorial Bronc Riding School. Photo by Danae Moore

GOODWELL — There is no denying that Oklahoma Panhandle State University is the bronc riding capital of college rodeo. However, the legacy continues to grow because of the annual Deke Latham Memorial Bronc Riding School and the tremendous amount of young talent that is exposed to the Panhandle State tradition each year.

With over nine world championship titles, numerous National Finals Rodeo qualifications and many collegiate accolades filling the Doc Gardner Arena, there was no doubt that the level of instruction surpassed that of any other rodeo school. Instructors included Robert Etbauer, Billy Etbauer, Dan Etbauer, Cody Taton, Trell Etbauer, Craig Latham, Bret Franks, Tyrel Larson, and Clay Elliott. In addition, the legendary Allen McCloy was close by keeping a sharp eye on all the livestock and future cowboys.

After four days of schooling in the Oklahoma heat and wind, the boys were able to put their newly acquired skills to the test during the Match Bronc Riding on Sunday afternoon. The youngest group of students put their bronc saddles on cows for a safer form of the traditional sport. Parker Glenn of Edmond, Okla. was the champion. The saddle bronc riding was divided into three divisions with the novice, advanced, and open.

Every year the instructors get together and select the student that they feel has improved the most over the course of the four day school. The recipient is awarded with a check for $1500 to put towards a new bronc saddle. This year’s champion was Tanner Hayes of Elkhart, Kan.

As the student athletes leave the arena to hit the books in preparation for final exams, they would like to extend a “thank you” to the community of Texas County and all the supporters of OPSU Rodeo. The winning tradition is able to continue due to the overwhelming support for this program.