Grider, Shives show up big as Silo takes two at home over Tushka 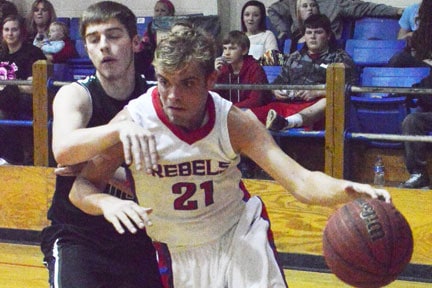 The Lady Rebels didn’t have a lead until 12 seconds left in the game.  The Rebels led almost throughout though the Tigers stayed within striking distance.

The storylines were different, but each told of a victory for Silo on Tuesday night.  The Lady Rebels defeated the Lady Tigers, 46-45, while the Silo’s beat Tushka, 63-52.

Mary Grider shoots over Tushka’s Carissa Moore and Kelsey Chambers (24). Grider had 21 points for Silo on the night. Photo by Zach Maxwell.

Katlyn Halley had only two points on the night, but they came at the best time for the senior.  The senior took a pass from Mary Grider, acting as a decoy, and converted the three-foot jumper giving Silo its first lead of the night in the final minute of the game.

The play was set up out of timeout and Silo coach Dax Simon said he was proud of the way the girls executed.

Only three other Silo players scored on the night.  Grider put in a game high 21 points, while Hannah Bourne had 13 and Riley Newton scored 10.

Bourne’s presence was felt on both ends of the court, and her defensive play kept her team in the game when Tushka would threaten to run away with it.  She had five blocks on the night and four resulted in points on the other end.  She also forced missed shots on many other occasions.

“She responded tonight,” Simon said.  “Any time she can defend that rim for us in girls’ basketball it’s going to give us a chance to win.

Tushka’s Jayden Eaves shared the game high with 21 points.  Jaylee Eaves also had 14 in the loss.

The nightcap was a matchup for first place in the Bryan County Conference.  Tushka entered the game without a league loss and Silo came in with only one.

Class 2A’s No. 12 Silo grabbed a lead midway through the first quarter and didn’t relinquish it.  Seniors Kendall Shives and Lance House led the way for the Rebels (11-4), scoring 23 and 19 points, respectively.

Tushka had it’s own star shine brightly on the evening, but he wasn’t an upperclassman.  Sophomore Isaac Cooper showed the Rebels what they have to look forward to seeing for another couple of years, dropping a game high 33 points on the home team with acrobatic shooting.

Silo opened up a lead a big as 13 points in the second quarter, but No. 13 Tushka, now 14-2 on the year, stuck around.  The lead was down to two points to start the final period and that’s when Silo took control, outscoring the Tigers 22-13 to pull away.

“This was a good win for us,” Simon said.  “This puts us in control of the conference title, the regular season title anyway.  Everyone has one loss.

“It’s a long way from over.  I’m sure we’ll see these guys again somewhere down the road.  So we’ll try to get buckled up and not get too big headed and see if we can’t get ready for the next time we play somebody good.”

It is likely the two will see each other as soon as next weekend.  The two are the top seeds in the Bryan County Tournament and could see each other in the finals.