Growth of lacrosse leads to historic game for Lady Bison 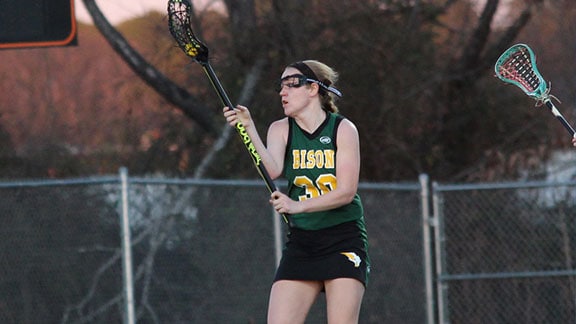 Growth of Lacrosse Leads to Historic Game for Lady Bison
SHAWNEE, Okla. – Lacrosse, dubbed the fastest sport on two feet, has been rapidly expanding westward over the last decade. On Saturday night, the next step in the sport’s growth in Oklahoma unfolds as the first-ever lacrosse game between NCAA opponents at any level will take place at the Oklahoma Baptist University Lacrosse Complex between the Lady Bison and the Falcons from the University of Montevallo.
“It shows Oklahoma Baptist’s commitment to excellence that we are able to bring such a high level of lacrosse to the state of Oklahoma,” said Robert Davenport, Athletic Director at Oklahoma Baptist. “We’ve seen a change in the national landscape with women’s lacrosse, even since we started the program in 2012. To be on the front end of that wave of growth speaks well for our program and the athletic department as a whole.”
In 2010, it was announced that Oklahoma Baptist would add women’s lacrosse, among other sports, three years before any other university in the state would add either a men’s or women’s lacrosse team. After two years of planning, the Lady Bison debuted in 2013 on the OBU Intramural Field in front of an audience brand new to the sport. In the years since, OBU has steadily improved, making a trip to the Western Conference tournament of the National Women’s Lacrosse League under Mereta Monsen last year.
As the page turned to the 2016 season, however, a bevy of changes have faced not only the women’s lacrosse team, but the athletic department as a whole. Oklahoma Baptist began competition at the NCAA Division II level at the start of the 2015-16 academic year as members of the Great American Conference. This transition comes on the heels of three-straight Learfield Cups, awarded to the top program in each division of the NCAA, as well as the NAIA.
For the team, specifically, the move to Division II competition began a search for a new home as the GAC does not currently sponsor the sport. The Lady Bison ultimately found a fit with the Rocky Mountain Athletic Conference, and will begin play in 2017, but will play as an independent in 2016. OBU also brought in a new coach, Jordan Beech, to help lead the team through the transition process after Monsen left program. Now, the team will play in the first-ever lacrosse game between two NCAA teams in the entire sporting history of Oklahoma.
“For the program, it’s a huge deal,” said Beech. “We’re the only Division II team in the state, and the closest Division II program for girls in neighboring states such as Texas and Arkansas as well. The hard work put in by the ladies over the last three years has helped bring us to this point, and it will help grow the game throughout Oklahoma and the surrounding area.”
Three Lady Bison have been present for all the “firsts” the team has enjoyed over the first four years of the program: Sabrina Attaway, Kari Callahan and Emily Joslin. They’ve experienced the highs and lows of spreading the sport’s message in an area where the sport has experienced slower growth. To be able to mark off another historic moment in the development of the sport in the Midwest has made them excited about what’s to come for the sport and the program.
“I think it’s a great opportunity, not just for the girls here, but for the program overall,” said Callahan. “We get to set the tone for the years to come as part of the NCAA. It could also be the extra push to get the program to that next level.”
“We’ve definitely grown a lot in the last four years,” added Joslin. “Coming in with girls who had never played a sport before and combining with a lot of local talent, it’s been awesome to see what the program’s become. I realize the impact of the game, but I’m also just excited to get out there and play!”
The Lady Bison take on the Falcons Saturday night at 6 p.m. at the OBU Lacrosse Complex.