Gundy made the right decision 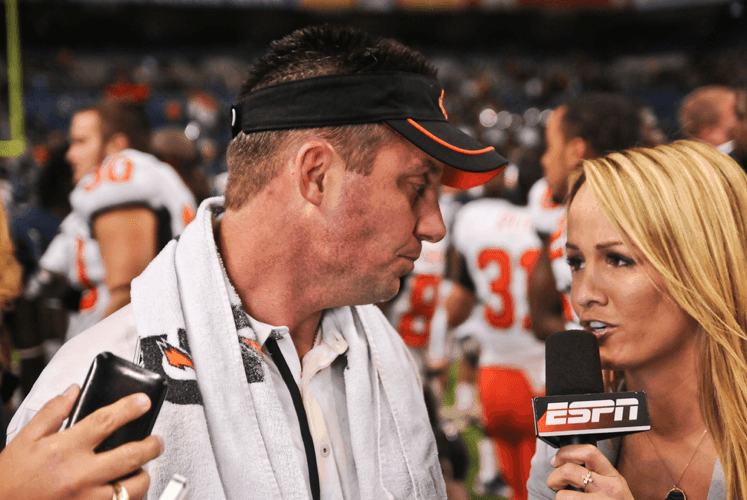 Today is Media and Fan Appreciation Day in Stillwater.  It’s a great time for people to get have interaction with the Cowboys’ football and soccer teams and coaching staff that they will be cheering for/griping about for the next four months. Autographs will be signed and optimism will abound.  The only thing missing from this scene is the most high-profile staff member on campus:  the head football coach.

Mike Gundy is in Florida today.

Coach Gundy is playing the role of “Dad” today and good for him.  His 9-year-old son, Gunnar, plays for the Oklahoma Elite team that has advanced to the semifinal game today in Orlando, Fla., at the USSSA 32 World Series.  A win would put the Oklahoma team is a championship game tonight.

Gundy said he had told his son that if his team was still playing on Saturday, he would be at the game.  Word is that he left Stillwater last night and is there today.  Good call, Coach.

Yes, the work is really hitting full swing here in Oklahoma on what could be a magical season.  Yes, there are many people who have made the trip to Stillwater to see the coaches and players and pledge their support to the Orange and Black for the fall.  And yes, there are so many things that a head coach of a Division I program could be doing/overseeing/critiquing on the first Saturday in August.

But yes, Coach Gundy, um, Dad Gundy, you are in the right place right now.

I coached high school sports in southern Oklahoma for nine years.  Throw in a junior high basketball season, too, just for good measure.  Six of those were H.S. basketball – my favorite.  In 07-08 and 08-09, I had two of my most successful campaigns, which included tournament championships and a pair of district championships.  (Unfortunately, I’m not up to the state tournament level with this story.)  My stock was rising.  But I found myself coaching games in one town and my girls playing games in another.  This was something that just wasn’t mixing for me.

I know, coaches make sacrifices like this all of the time.  Coach Gundy does often as well.  But he is to be commended for making an exception on a day when his presence isn’t really necessary.  Everyone in Stillwater today will get through the Fan Appreciation fine without Mike Gundy.  And after all, it is Fan Appreciation Day, not Coach Appreciation Day.  It should be understood that a man has to take care of his family, too.  So most will discern that Gundy is in the right place.

And for those who do not, get a life.  Although Gundy is in the bleachers and not on the sidelines today, he still is in position to make the call.

And he made the right one.