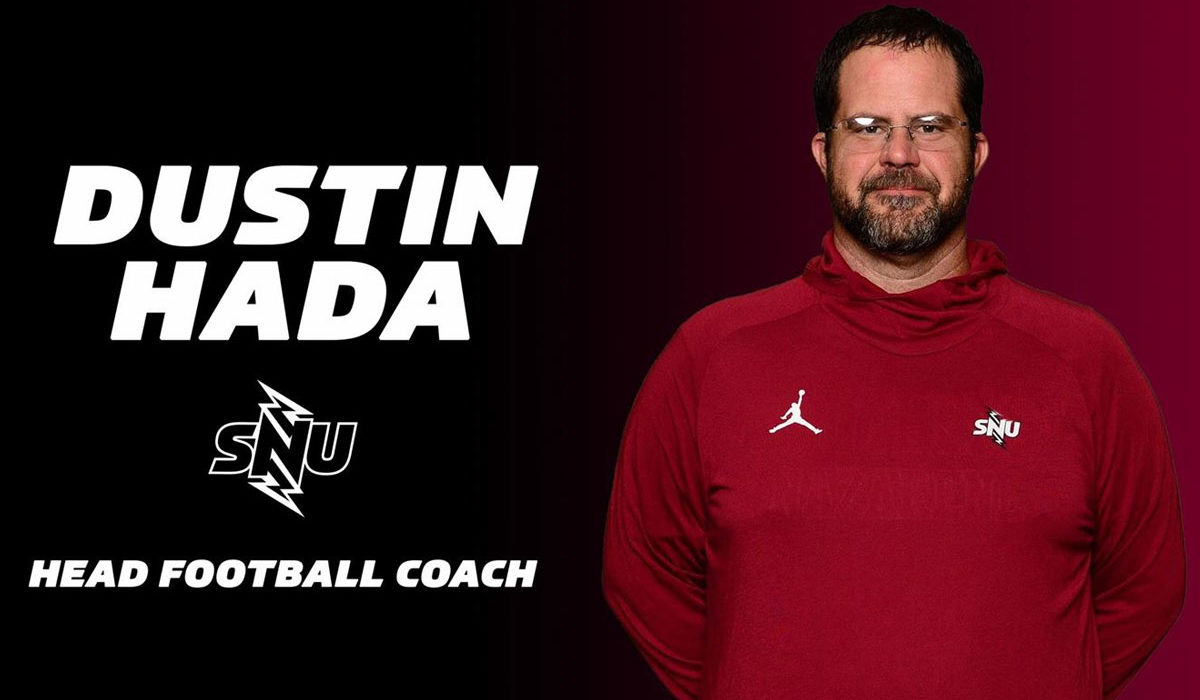 BETHANY – Dustin Hada has been named the next head coach of the Southern Nazarene University football program, SNU Director of Intercollegiate Athletics Danny Thomason announced on Thursday afternoon. Hada becomes the fifth head coach in SNU football history and will lead the Crimson Storm into their 21st season next Fall.

“We were fortunate to have several qualified applicants and Dustin’s dedication, passion, and plan for SNU Football is what made him our choice.” Thomason said. “It was also important to hear from current players and there was a strong support among them for him to be the next head coach. Most importantly, his heart for SNU’s Mission to make Christlike disciples through higher education came shining through.”

For the past four seasons, Hada served as Southern Nazarene’s Offensive Coordinator and Offensive Line coach under former SNU head coach Andy Lambert. Since his arrival in Bethany, Hada has helped the Crimson Storm offense to over 6,800 rushing yards and 56 touchdowns. In the last four years, he coached seven All-GAC selections including a league-best 24 GAC All-Academic Team recipients a season ago.

“I am humbled, honored, and blessed beyond measure to be offered the Head Coaching position at SNU.” Hada said. “I am looking forward to building on the broad, strong foundation laid in place by Andy over the past four years. He is a great friend and mentor, and I’m honored to be in this position.”

Prior to SNU, Hada spent one season at fellow Great American Conference member Northwestern Oklahoma State serving as the Associate Head Coach. He also served as the Offensive Line Coach, Camp Coordinator and Academic Coordinator for the Rangers.

Before his one-year stint in Alva, Hada spent six seasons at Southwestern Oklahoma State in Weatherford. Starting in 2009, he served as the Offensive Line Coach where he had five different All-Conference selections. In 2012, Co-Offensive Coordinator duties were added to his plate as he had the No. 2 and 3 career rushing leaders in school history. In 2014, he was named Assistant Head Coach of the Bulldogs while continuing to serve as the Co-Offensive Coordinator.

He also coached nine seasons at Olivet Nazarene (2000-08) where he helped the Tigers win the NCCAA Victory Bowl in 2004 and 2005. ONU also won the Mid-States Football Association title in 2003. During his tenure with the Tigers, he also coached three different NAIA All-Americans. He served as the Defensive Coordinator from 2003-08, Outside Linebackers and Strong Safety Coach from 2007-08 and the Defensive Line Coach from 2000-07. He was also the Strength and Conditioning Coordinator from 2002-08. During the Spring of 2000, he served as an Offensive Line Assistant at Mid-America Nazarene.

Hada earned his bachelor’s degree in biology from Mid-America Nazarene in 2000 and obtained his master’s degree in teaching from Olivet Nazarene in 2002. He was a four-year letterman at MNU where he was selected to the National and HAAC vs. NIAC All-Star games. He helped lead the Pioneers to three different bowl appearances as well.

Hada and his wife Dana reside in Weatherford, Okla. with their daughter Maddy.