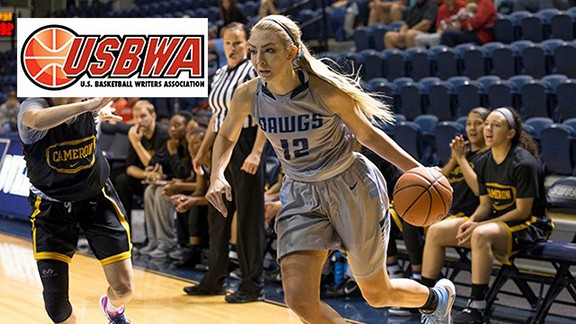 ROLLA, Mo. – Hailey Tucker of SWOSU Women’s Basketball has just been named the United States Basketball Writers Association (USBWA) Player of the Week which makes her the first recipient of the honor this season.

Tucker, a sophomore from Bartlesville, Okla., posted back-to-back double digit scoring and rebounding numbers in the Lady Bulldogs first two games of the season last week. Against No. four-ranked Emporia State in the season opener on Saturday, Tucker scored 26 points on 9-19 shooting while grabbing 12 rebounds (eight offensive, four defensive), three blocks, and two assists in the game. She also knocked home 7-10 from the free-throw line and 1-3 from the three-point line in 32 minutes on the floor.

The following afternoon against Missouri Southern State, the sophomore recorded her second double-double more efficiently on 9-15 shooting (60 percent) while still coming down with 10 rebounds (one offensive, nine defensive) in the game. Tucker sunk two three-point shots out of five tries, and ended the game with two assists to her credit in 35 minutes of playing time.

This is the second award Tucker has picked up after her performances last week, having already been named the Great American Conference’s Player of the Week on Tuesday.

Tucker and the Lady Bulldogs lost their season opener to Emporia State 87-65 but bounced back against Missouri Southern State 90-73 to even their record up at 1-1 heading into the first conference game of the season against No. 25-ranked Arkansas Tech on Thursday (Nov. 17).