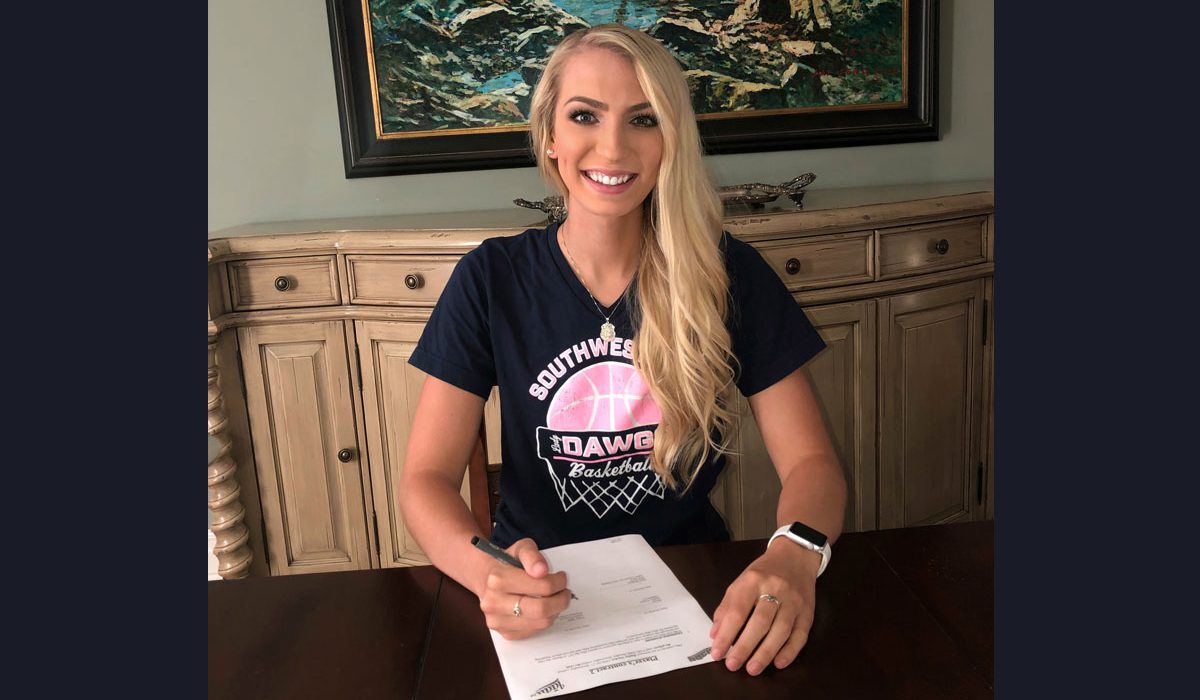 WEATHERFORD – Following a legendary career playing for the Lady Bulldogs, former SWOSU All-American Hailey Tucker is headed to Sweden to open her professional playing career as a member of Visby Ladies.

“I’m super excited to have just signed with Visby Ladies,” Tucker said. “I wasn’t too sure if I would play professionally or stay in the states and start my broadcasting career, but I believe that I made the right decision to go overseas and continue playing. I’m extremely excited to go to Sweden and have the opportunity to explore a country I probably wouldn’t have gotten to go to until I was older.”

After coming to SWOSU from Bartlesville in the fall of 2015, Tucker quickly made an impact on the court and put together an illustrious career for the Lady Bulldogs. This season, she led the Lady Dawgs to their best season as an NCAA Division II institution, winning 35 consecutive games while claiming the Great American Conference regular season and tournament championships. SWOSU continued on to claim the Central Regional Championship and advance to the Elite Eight for the first time in program history, making it all the way to the NCAA Division II National Championship game, where the win streak was ended by Lubbock Christian in double overtime.

“We are so proud of Hailey. She is a tremendous player who has helped take our program to the next level and left a legacy,” SWOSU Head Coach Kelsi Musick said. “Now she gets this amazing opportunity to continue her playing days and represent SWOSU at the next level and we wish her all the best throughout her professional career!”

Tucker graduated from SWOSU ranking second in program history with 2,360 career points – which is more than any other player in GAC history and ranked 19th all-time among players in NCAA Division II history. As a senior, she averaged 18.6 points and 7.0 rebounds per game, which earned her a First Team All-GAC selection for the fourth straight season and a selection to four All-America teams. Tucker was named First Team All-American by WBCA, Second Team by the Division II Bulletin and Third Team by D2CCA while earning a Second Team Academic All-American selection as well. In addition, she was named to All-Tournament teams at the GAC Tournament, Central Regional Championships and the NCAA Division II Elite Eight.

“I want to say ‘Thank You’ to my coaches, Coach Musick and Coach (Cophie) Anderson for everything they’ve done for me,” Tucker said. “They have become my family in just four short years and I’m so glad and honored that we seniors got to leave the Lady Bulldogs with a national runner-up title. I also would like to say thank you to the athletic department for always being there for not only me, but for our whole team.”

“To the fans and community – Thank You!” she continued. “From the bottom of my heart, I want to thank you for being so supportive and always showing up to our games. There are no words to describe the feeling of looking up and seeing the stands completely filled during a game at the Pioneer Cellular Event Center. I would just like to say ‘Thank You’ and I’ll be back to watch and cheer my Bulldogs on! Go Dawgs!”

Tucker has signed a one-year contract with Visby Ladies, which begins in September and continues through the end of the playoffs in May. On their official website, Visby promotes that all home games are streamed for free online and they’ve had three straight seasons with the second-highest attendance figure in their league. Tucker becomes the second Lady Bulldog under Musick to sign and play professionally, joining Janae Coffee who inked a contract with Kenitra AC in Morocco for the 2016-17 season.

Visby Ladies plays in the highest basketball league in Sweden and they will be playing their 36th season of professional basketball when the 2019-20 season tips off. This past season, Visby missed the playoffs for the first time since 2009-10, but they’ve began restocking their roster with prior American signings of Alexa Middleton from Iowa State and Julie Spencer out of Portland.