Haley’s three at the buzzer salvages split for Duncan 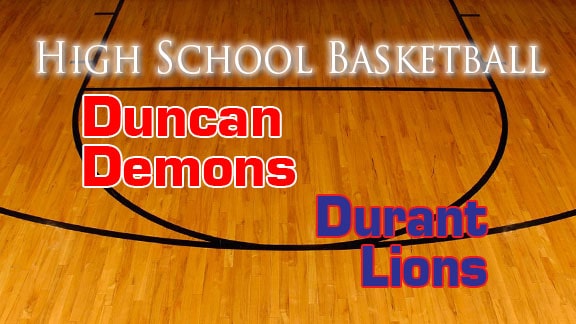 DURANT – The home crowd in Durant thought Aaron Haley may have been a little closer to the goal than he should have been for his last-second shot to count as three, but he got all three points and the Demons got the win.

Duncan (0-5) had 10 turnovers and one point in the first quarter, setting the pace for what would be a very frustrating game for the Lady Demons offensively.

The Durant offense wasn’t much better in the first half and the Lady Lions led only 14-8 at halftime.  But both Durant’s offense and defense stepped up in the second half, scoring 24 and shutting out Duncan entirely.

The Lady Demons had 32 turnovers on the night and did not record a point in the second half.

The inside game for the Lady Lions was the key.  Durant post players Ciera Taylor and MaKayla Patton led the way with 17 and 10 points, respectively.

It took the Duncan (3-2) offense about a half to get going.  All five Duncan starters put points on the board in the third quarter and the 17 points in the period matched the Demons’ output in the first half.

More importantly, the halftime deficit was cut to one, making the way for the game’s final possession.

Nathan Clark got to the basket and got to the free throw line to lead the way for his team.  He had six of his game high 12 in the big Duncan third quarter and shot 6-of-7 from the line for the game.

Durant (2-5) got up early, 16-8, in the first quarter, but couldn’t keep the offensive momentum going.