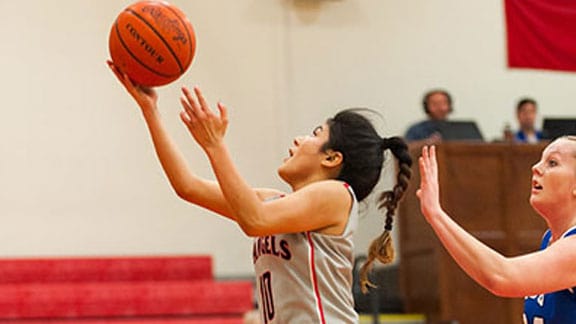 Hannah Moeller made a tough decision this spring.

She chose to leave a program that was playing at a high level and for national championships each year. And she headed for a program just down the road that had potential, but hadn’t yet gotten to that level. The challenge was there.

The midseason results seem to show this new program is on the rise.

Moeller left Randall University (then Hillsdale Baptist) after an NCCAA national runner-up finish in 2015-2016 to take the head coaching position a few miles away in south Oklahoma City at Mid-America Christian.

The Lady Evangels are now 11-2 and 2-0 in the Sooner Athletic Conference and have gotten out to the best start in the program’s history since the transition to the NAIA.

Moeller said she is pleased and maybe a bit surprised by the early success, but quickly gave the credit to the efforts of her team.

“I tell our girls all the time, if somebody would have told us in August where we would be sitting at this far in, I would have probably thought they were a little crazy,” Moeller said. “But they have done a phenomenal job of buying into the bigger picture and really working every single day. So when we step out on gameday, we are ready.

“Probably the best complement we’ve gotten this year, and I gotten it from a handful of people I really respect, is about how hard our kids are playing. I think that has a lot to do with any and all the success we’ve had at this point. They play really hard, even on the nights where we may be walking into a situation where we don’t have the advantage, I feel like it’s given us a head up multiple times.”

MACU has had a pair of five-game winning streaks and is getting it done of the offensive end of the court. The Lady Evangels lead the SAC and are third in the country in scoring, putting up 85.5 points per game.

The offensive effort is led by junior guard Sarai Rodriguez, who is scoring 20.5 ppg and is sixth in the nation in that category.

“Sarai’s offensive skill set is just so impressive,” Moeller said. “She spends more hours in the gym than any other player I’ve ever coached, so that is a testament to her production.

“She can score in so many ways and that makes her so tough to guard. I think for us as a team, it’s something that we really rely on.”

Rodriguez set the pace for the season as she opened the year with a season-high 29 points to go with five rebounds, seven assists and four steals in a win over Grace University.

“Offensively with her, she does such a good job. Sarai plays a ton of minutes for us, and that doesn’t seem to waver much for her production at the same time. I never cease to be amazed as to how she stays in there, regardless of whether she’s tired or not.”

An addition to this year’s team has helped in getting the ball going Rodriguez’ direction. Sophomore Mykayla Flores transferred in from NCAA Division I Texas A&M-Corpus Christi and is fourth in the nation in assists, dishing out 6.3 per contest.

“Mikki has been such a great addition,” Moeller said. “I feel lucky to have her. She really has a motor and she’s hard to guard. When Mikki gets going downhill with the basketball, there’s not been a lot of people that have been able to stop her yet.”

Flores can not only pass the ball, she can also put in the basket when she has it. She put in a team-high 23 points, hitting 3-of-6 from behind the arc in a recent exhibition game at Oral Roberts.

“She made those three-pointers at ORU against clearly bigger-sized kids. She’s a tough matchup.

“And the biggest upside for Mikki is that she is only a sophomore and we feel like that as time goes on, the sky’s the limit.”

MACU is heading into one of its toughest games of the season to date. Tonight, the Lady Evangels go to Oklahoma City to face the No. 8 Stars (11-1, 2-0 SAC) at Abe Lemons Arena.

Mid-America Christian has not beaten Oklahoma City is 20 attempts.

“There are a lot of pluses going into this. I don’t think anyone outside of the 12 of us and our crew expected us to have a lot of success, but we’re going to go and compete. I feel like our kids can play with anybody in the league on a good night.

“But all the credit to OCU. They have such a strong crew, especially in their first group. They’re so offensively skilled.”

And this is portion of the season in which MACU needs to do well, the Sooner Athletic Conference part of the schedule. MACU has finished a season only once with a winning record in league since being in the SAC. In 2013-2014, the Lady Evangels had an 11-9 SAC record.

That season was the first for Hannah Moeller’s husband Marcus as the head coach of the MACU women’s basketball team.

“I’m excited to see how we perform in that setting,” Moeller said. “It is a big game. I felt like we played well against Wesleyan, another team in the league that just does a good job every night.

I just think it’s a good matchup. There’s not a lot of pieces that OCU has that I think we don’t. Now, we’re going to have to do a lot of things well on the defensive end and take care of the basketball. They turn people over at a high rate. So we need to do our job, but I feel like if we do, we’ll be in a good spot.”

The Lady Evangels’ hard work has gotten them a good record in the first half of the season, and with that, surely the attention of their SAC opponents.

Now the trick is to follow that up with solid results in the second half to make a push toward the postseason.

Tip time for tonight’s ballgame at OCU is set for 6 p.m.