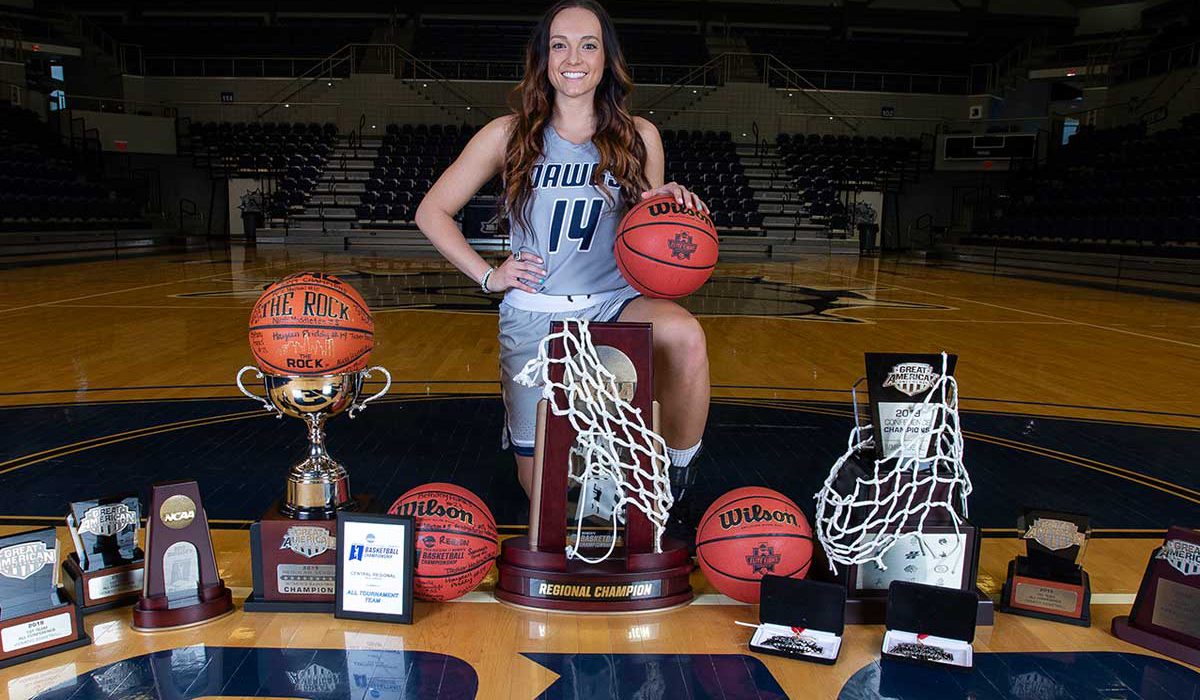 The Jim Thorpe AAU Athlete of the Year award is voted on annually by the executive committee of the Oklahoma District with nominees including amateur athletes with Oklahoma ties in any sport. Past winners include Oklahoma football players Sam Bradford, Baker Mayfield, Gerald McCoy and Jason White, Sharon Bell of St. Gregory’s softball and Jaden Hobbs from Oklahoma State basketball.

Priddy will be presented with her award at halftime of SWOSU Football’s home opener against East Central on Saturday, Sept. 14.

“I think originally, I didn’t truly grasp how much of an honor it was to win this award,” Priddy said.
“To even be nominated for an award named after Jim Thorpe is a big deal and then to be selected as the winner is pretty surreal. These past four years have been amazing and to have this at the end is really cool.”

A native of Piedmont, Okla., Priddy put together an illustrious four-year career playing for the SWOSU Women’s Basketball team. As a senior, she helped guide her team to their best season as an NCAA Division II institution with a 35-2 overall record and a National Runner-up finish after winning Great American Conference Championships in the regular season and the conference tournament. In the postseason, Priddy was named the Most Outstanding Player of the Central Regional Championships following a memorable performance with 32 points in the regional championship victory over No. 3-ranked Fort Hays State in front of the largest crowd in Division II last season.

As a senior, Priddy averaged 17.1 points, 3.6 rebounds, 3.1 assists and 2.1 steals per game and she connected on a GAC-best 91 three-pointers, an average of 2.5 per game. For her efforts, Priddy was named the Great American Conference and Central Region Player of the Year and she was selected to three All-America teams, earning First Team honors from the Division II Conference Commissioner Association (D2CCA) and Division II Bulletin along with honorable mention from the Women’s Basketball Coaches Association (WBCA).

Although her days on the basketball court are behind her, Priddy now has a Business degree in hand and a full-time job on campus after starting a position as an Admissions Recruiter earlier this month. In her new role, Priddy will serve as a recruiter for the entire SWOSU campus and work directly with prospective students and their families.

“These past couple weeks have been very bittersweet, it’s like a new chapter is beginning,” Priddy said. “The girls have been going through preseason and getting their pictures taken and all, so it’s starting to sink in that I’m not on the team anymore and that part is sad. But knowing that I’ve left my mark on SWOSU and this program is something I’m very proud of. The way everybody treats me on campus and the way the fans supported me, my team and my coaches the last four years has been unbelievable. I couldn’t have asked for a better place to play and a better community to be a part of. Go Dawgs!”

The award’s namesake, Jim Thorpe, is considered one of the most accomplished and versatile athletes of modern sports. He was an Olympian and won gold medals in both the decathlon and pentathlon, but he also competed in football, baseball, basketball, boxing, lacrosse, swimming and hockey. From winning gold medals in the Olympics and being inducted into the Pro Football Hall of Fame, Jim Thorpe is looked at by many as one of the greatest athletes of the 20th century.

“The Jim Thorpe Athlete of the Year award is a prestigious award because it goes hand-in-hand with the namesake,” Jeff Duke, Lt. Governor of Oklahoma AAU said. “It’s a unique award in that it acknowledges an athlete with ties to Oklahoma for their excellence and it’s an honor to be associated with Jim Thorpe. Hayden Priddy is a very deserving recipient and I look forward to presenting her with the award.”