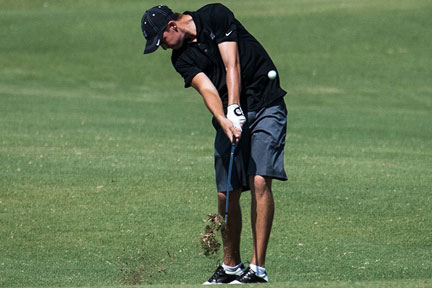 Often in life it seems that even when things are going well, there is still room for improvement.

The junior started the 2013-2014 season with three wins in his first four tournaments.  But Hearne recognized an area which he could develop further.

Hearne opened the fall with individual wins at the GAC Preview at Lake Hefner in Oklahoma City, the NSU Classic at Emerald Hills in Broken Arrow and the Texoma Championship at Chickasaw Pointe in Kingston.

But he finished 28th in the Territory Classic in Duncan in the final event of the first half of the season and Hearne found a place to better his game.

“The scoring clubs in the bag, inside 130 yards, is what I’ve been concentrating on,” Hearne said.  “Last semester, I thought I wasn’t good enough from that distance.  I was letting shots slide by and not making putts where my competitors were.

“In golf, it’s not really how far you hit it, if you can get the ball in the hole, that’s the main thing.

“That’s really what I’ve been concentrating on lately is really tightening my game up in a variation of shots.  I’m practicing different types of golf shots that I can use in any situation.  So that has really helped my game at the moment.”

That appears to be the case.  Hearne has won the first two events in the spring – the San Antonio Shootout and the Dave Falconer Memorial.

On top of the that, Hearne shot under par in three of five rounds in those events.

“I really worked on a few things over Christmas Break and I came back generally excited to play golf and ready for the semester to start,” Hearne said.  “Excited to play down in San Antonio because obviously the weather we’ve had in Oklahoma has been terrible.  I didn’t get to practice much.

“I practiced as much as I could and concentrated on the short game mainly and the scoring clubs in the bag.  And it really paid off down in San Antonio, which was great and it was really nice to get down there and play in the sun.  I played really and well and had a strong finish.

“And then last week in Russellville, I just kept steady, really.  I’m really enjoying my golf at the moment.”

Hearne has been named the Great American Conference Player of the Month for February.  It’s his second time to receive the monthly honor this season.

“I’m not worrying about things.  I’m not thinking about it too much.  I’m just letting it take over and letting whatever happens, happen.

“It’s nice, I’m really starting to enjoy things and everything just seems to be clicking in.  I’m hoping we can continue this form for the rest of the semester.”

Hearne and the Crimson Storm head to Wichita Falls, Texas, for the Midwestern State Invitational, which begins on Monday.  Among those competing in the event is MSU’s Derek Oland, the current Lone Star Conference Golfer of the Week.

But Hearne said he is competing against the field rather than seeing this as a one-on-one matchup.

“I just play my own game,” Hearne said.  “You can’t get tied up against another person.  If I’m paired up with another player or someone else in our group, you can’t play against just one person. There are 60 or 70 players out there doing the same thing.

“If you get tied up playing against one person, you focus too much on them instead of focusing about your game.  I have enough to worry about in my own game.”

This week’s competition, which also creeps into Hearne and SNU’s spring break is the first of two remaining on the regular season schedule before the Great American Conference championship on Apr. 14-15.