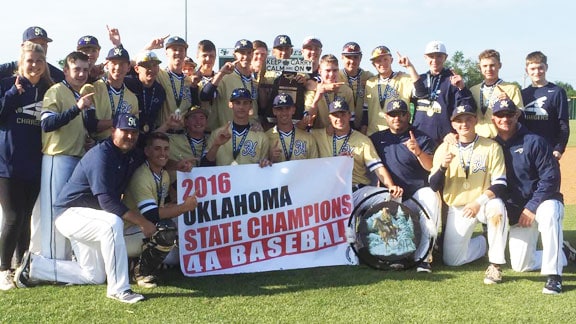 There was more than enough celebration to go around on Saturday for Heritage Hall athletics.

Fans of Charger baseball, boys soccer and boys tennis all got to enjoy their team winning a title. And none of those fan bases were unfamiliar with what it is like to celebrate.

“It was a very fun day for our fans, our coaches, our players and all of our alumni,” said Rod Warner, director of athletics at Heritage Hall. “It was a tremendous effort by all our of coaches and players.”

It took some creative scheduling, but Warner got to be a part of each of the championships.

“I got to see the soccer game in its entirety,” Warner said. “And then I went to the final matches at the Oklahoma City Tennis Center. And then once it was, not actually completed, but in hand where we knew we were winning the title, I left and made the last two innings of the baseball final.”

The boys soccer team on Saturday won its third in a four-year span. Heritage Hall outscored its opponents, 19-3, during the four matches of the playoffs and beat Bishop McGuinnes, 4-1, in the title match at Taft Stadium in Oklahama City.

The boys tennis team completed its third consecutive run to a state championship, amassing 29 points on the day at the Oklahoma City Tennis Center. In the four tournament brackets, HH had a third place finish (No. 2 Doubles), two runners-up (No. 1 Singles and No. 1 Doubles) and a 6-1, 6-3 win by top-seeded Will Kaiser in No. 2 Doubles over Bishop Kelley’s Jeremy Vaughn.

It marked the fifth state championship in six years for the storied boys tennis program and 18th overall.

The baseball team got into the act, closing out the evening with a win over Berryhill. The Chargers held off the Chiefs, 2-1, in the championship on the campus of Edmond Santa Fe.

Heritage Hall trailed No. 1 Tuttle by six runs in the seventh inning in the state semifinal and rallied to secure a place in the final game on Saturday. The title was the second consecutive for HH on the diamond and third for the baseball team overall.

Warner said the key ingredient to the continued success of late for the Chargers was the student-athletes themselves.

“I think that first of all, you have to have tremendous kids,” Warner said. “I mean, you can have great coaches, which we do. And we can have great support by our administration, which we do. But if you don’t have the players and the talent level that we’ve been blessed with over the last few years, you’re going to struggle.

“Our kids work very hard and they develop well through our strength and conditioning program and work hard with our coaches. And we’re just proud of our programs and hope to continue.”

The biggest problem for the Chargers’ athletic program may be finding room for all the banners. The titles earned on Saturday were Nos. 78, 79 and 80 overall and brought the total to 12 in the last two school years.

Not a bad problem to have.