Hey, come kick for us! 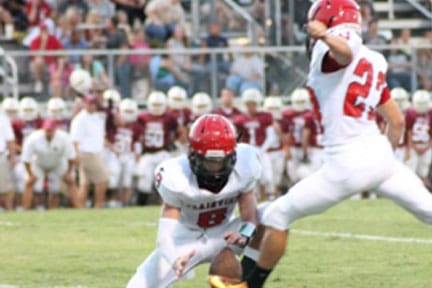 It’s a bitterly cold day throughout the state of Oklahoma, but that hasn’t chilled the spirits of athletes and parents, coaches and fans excited about the promise of the future.

Today is the day many seniors will sign a Letter of Intent to declaring their choice of university at which they will hopefully continue promising football careers.

Among those is Trey Tully.  The senior from Plainview has served as the kicker for the Indians.  His team finished 2013 with a 13-1 record and made it to the Class 3A state semifinals.

But his kicking career isn’t yet finished.  Today he will sign to take the step.

Tully is an All-District kicker and will be headed to Shawnee to play for coach Chris Jensen and to join a revived Bison football program that has just completed its first season in 73 years.

He is already familiar with the campus.

“I started going to a Christian leadership camp called Super Summer that takes place at OBU,” Tully said.  “It was the first college that I had visited, other than going to a couple OU and OSU games.  And just being on campus and being in that atmosphere with friendly people who are willing to stop and talk to you even though they don’t know you.”

Football didn’t lead him to Shawnee, but it was definitely the sticking point.

“It was honestly the atmosphere of the campus that drew me to it, and then I found out they were going to get a football team, and I was like, OK, we’re in business.”

Tully said he is glad for many reasons to continue playing the sport he has come to enjoy and knows the journey could continue for quite a while.

“I had a lot of fun this season and I feel like God really gave me a good opportunity to interact with some buddies and just play football.

“I love the game and it also set me up to make some scholarship opportunities for college.  And maybe even one day to go to the NFL – I can go as far as I’m willing to work.”

A strong desire to work hard is not something Tully is lacking, according to Chris Berus, his coach at Plainview High School.

Berus spoke of the strengths of his kicker, beyond those of just his leg.

“I really cherish the relationships with my players and Trey is one of those that has challenged me at times and hopefully I have challenged him with our faith and our desire to do and to be the right person.”

And the coach said Tully brought to his team more than what is often given from a someone playing in a specialized position.

“As far as a competitor and his ability to perform, obviously Trey is very talented,” Berus said.  “He is a young man that I have attempted on a few different occasions to try to do more than kick because of his athletic skill set.  He has really good strength for his size and he runs really, really well.

“But in the offseason workouts that we have in the winter, the spring and in the summer that are obviously geared toward those kids that are going to be playing on Downs 1-3, Trey never missed a beat.  He’s as competitive in those workouts as our starting running back and our defensive linemen.

“He’s a leader among the bunch and that’s not common with that position.  But because of the young man that he is and the way he’s established himself with his peers, they respect him and that’s why he’s able to do that within the locker room.

Tully hasn’t always played football, though.  He started out as a soccer player.

“I’d never really given football any thought,” Tully said  “I thought, ‘Man, it’s just a bunch of meatheads out there hitting each other and getting hurt.’  And I’d never given it any interest.

“But a buddy of mine said, ‘Hey, come kick for us.  Maybe you can play a little running back, play a little corner.  Do what you want to do.’  So I thought I was a freshman, just getting into high school, so I decided I’d give it a shot.

“I started out playing running back and corner and I liked it.  I’d come home with a sore neck, but it wasn’t any big deal – I liked to hit and I liked to run the ball.”

Kicking finally made it to the table.

“But in my first game my freshman year, Coach Berus said, ‘Why don’t you kick the ball?’  So I got up there and kicked it and, you know, it wasn’t very good.  It was my first kick.  But in my second kickoff, I smashed it and it went into the endzone.  And I thought that maybe this was something I want to do.”

Tully wants to use what he has been given to go farther in life.

“I feel like God has given me the ability to kick and the focus and determination.  And I just want to use that.

“Football is fun and it’s an opportunity to connect with people.  I feel like God blessed me with a strong body and a strong leg to be able to play and kick well.  But I believe He put me with the people I’m with for a reason.

“For example, I’m getting a scholarship and I’m able to get money to pay for college through playing football.”

So when OBU presented the offer Tully’s friend from high school had four years before – Hey, come kick for us – Tully accepted.

And Berus said he believes it’s the right place and the right time – and not just for Tully’s benefit.