Hicks’ move to the middle proved to be right 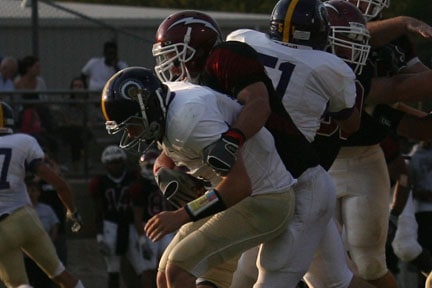 Michael Hicks never dreamed that he would be playing college football at this point in his life.

He had played sports on the college level before.  There was a season of baseball at Rogers State, just after he graduated from Cushing High School – in 2005.  Then there was a short stop at Northeastern A&M where he played in two games before shattering his right shoulder.

And then there was a four-year stent in the United States Army.

Now, in the summer of 2012, Hicks is taking part in summer workouts and preparing for his second season at Southern Nazarene University after completing one of the best defensive performances in the state at any level during his freshman year in 2011.

And all of this while also playing a position he had never though about playing before last season: middle linebacker.

“Never did I imagine this after getting out the Army and not playing football for four and a half years that God would still allow me to play the game,” Hicks said.  “And I feel a sense of direction now and I could possibly play at the next level.”

Hicks knows that getting to that next level will take a lot of work, but he said that he’s got the work ethic to do it.

And the accolades he received as a result of his efforts on the field in 2011 seem to reflect that.  He earned All-American honors as well as being named to the First Team All-Conference in the Central State Football League.  He was also the CSFL Defensive Player of the Week four times during the season.

“I can’t begin to explain just how humbled I am by all of it, and just to even get to come back and play the game of football,” Hicks said.

IT WASN’T ALL ROSES

Hicks could have drifted away from sports after his injury at Northeastern A&M.  Additionally, while he was in the army, he was near a grenade when it discharged, causing him to lose 85 percent of the hearing in his left ear and 30 percent in his right ear.  Another shoulder injury while in the service added to the unlikeliness of his athletic career.

However, prior to joining the Army, Hicks had contacted SNU coach Mike Cochran.  Cochran had never seen Hicks play, but was willing to allow him the opportunity to attempt to walk on.  Although Hicks didn’t take him up on that immediately, Cochran had stayed in touch with Hicks.

“Coach Cochran kept in contact with me the whole time I was in the Army,” Hicks said.  “I received probably one e-mail a month from him.  And it was just a ‘Hey, how’re you doing?’ not a ‘Come back and play football.’

“It was a ‘Hey, we hope you’re doing well.  We pray for you and we’re thinking about you.’”

Not long after his military discharge, Hicks thought once again about playing football.  His original dream was to play at Oklahoma State where he could have the chance to walk on.  But the same offer was still on the table from Cochran to try it out at Southern Nazarene.  Family circumstances channeled his decision toward SNU.

But everything was not yet in place for the explosive season that Hicks was to have.

When he got to campus in Bethany in the spring of 2011 for spring workouts, Hicks was competing for a spot on the team at outside linebacker.  Coming out of the semester, he was fourth on the depth charts.

So Hicks contemplated Stillwater once again.  He figured if he was going to be on the bench, it might as well be on a bigger bench.

But Cochran and his staff had another idea.

“They asked me if I’d ever played middle linebacker before and I said, ‘No,’” Hick said.  “So they said they wanted to try me out there.”

This took place just a week before the spring game and although Hicks had little time to prepare, it proved to be the right move for everyone.

“I don’t know what happened,” Hicks said.  “I hadn’t thought about playing there before, but I absolutely found my niche.  I loved it.

“And I decided that I was going to stay at SNU.  Not because I was starting – I wasn’t at the time – but I loved playing middle linebacker.”

It might be fitting to say that the rest is history.  But for Hicks, “the rest” is yet to be played out.

He will be a sophomore at SNU for the 2012 campaign.  And although the Crimson Storm is coming off a 9-3 season (due in no small part to Hicks’ play), Southern Nazarene is looking at a tougher schedule in the fall.

SNU is in coming into Year Two of the three-year transition from NAIA to NCAA Division II.  The Crimson Storm is playing a schedule consisting of many of their new conference rivals from the Great American Conference, and only three of those 11 games will be at home.  But Hicks is undaunted.

“At the end of the day it’s just football,” Hicks said.  “And the impact that it’s going to have on our team depends upon how much our guys put into it.”

Hicks is keeping busy this summer.  He works with security for Sandridge Energy.  And he is working out four to five times each week in preparation for the fall, and also later this summer.

Hicks will be taking his football skills abroad and as an instructor, not just a student.  He is travelling to Europe with Cochran and some other coaches to teach the sport of American football to many who are eager to learn.  The men are working with a mission program called The Way and will be holding camps in Innsbruck and Graz, Austria in July.

“American football is starting to grow in Europe,” Hicks said. “They love football and they really want to learn.  And I’m really excited to go.”

Hicks is making the most of the opportunities he has right now and said that he feels there is purpose.

“I don’t think that God gave me this ability to waste,” Hicks said.  “I believe that I’ll have an opportunity to at least try to make it at the next level.  And it’s up to me and my work ethic to make that decision and to see how far I can make it.”

In the mean time, Great American Conference offensive coordinators will have to deal with stopping the advances of the Crimson Storm middle linebacker.  And middle linebacker is a position with which Hicks now has some experience.