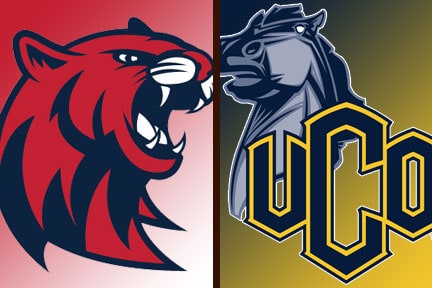 EDMOND – Rogers State men’s basketball returned to the win column while giving host Central Oklahoma its first loss of the season  with an 86-81 victory over Central Oklahoma inside Hamilton Field House Saturday evening.

RSU opened the second half with a 20-8 run in the first seven minutes of play to build a 60-45 lead, the largest of the game for the Hillcats. JD Tisdale led the run with 11 of his 20 points coming in the seven minute stretch that started with a 3-pointer from the left wing and included an alley-oop slam off a Baron Smith Jr. assist.

UCO responded by slowly chipping at the Cats lead behind the play of Marquis Johnson as the freshman for the Bronchos scored from the paint, from the free throw line and from behind the arc to pull within seven at 60-53 with 10:47 left. The Bronchos tightened the screws with 3:49 remaining with a 7-2 run started by a Josh Holliday 3-pointer and capped by a pair of free throws by Jordan London as RSU led 78-73.

Hillcat upperclassmen stepped up big in the final 2:04 first with a pair of free throws by Tisdale and then a block by Christopher Ikuenobe led to a layup by Jordan Huffman to put RSU ahead with 1:37 remaining at 82-73. The Bronchos cut the Hillcat lead down to three as Cooper Clark connected from long distance and Corbin Byford kissed a layup off the glass with 18 seconds to go.

Smith knocked down two free throws and the Hillcats locked down defensively for the final 16 seconds to force a hurried 3-pointer from Holliday that didn’t connect and Jeylyn Sharpe corralled the rebound and the 86-81 victory for RSU.

The Hillcats held a 40-37 first half lead behind balanced scoring as all but three players scored. Neither team led by more than five points in the first stanza but RSU held the advantage for most of the period.

Tisdale led RSU with 20 points as Jeylyn Sharpe totaled 15 and Baron Smith added 14 points as nine of the 12 Hillcats that saw action contributed to the score sheet.  RSU shot 53.8 percent from the field, 45.5 percent from behind the arc and 78.1 percent from the charity stripe, knocking down 20-of-24 in the second half at the free throw line.

Rogers State (4-2) will finish its three game road trip with an exhibition contest at Oklahoma State on Wednesday, November 30 at 7 p.m. The match-up is a regular season contest for the Cowboys inside Gallagher-Iba Arena and will conclude the exhibition season for RSU. Live play-by-play coverage will be provided on RSU Radio 91.3 FM and on the Hillcat Network at www.rsuhillcats.com/live.