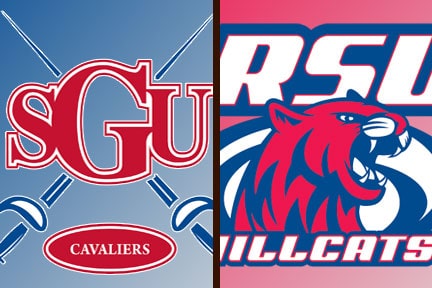 CLAREMORE, Okla. – The No. 13 Rogers State women’s basketball team hung on late for a 61-59 win over Sooner Athletic Conference opponent St. Gregory’s on Saturday afternoon at the Claremore Expo.

RSU led by double digits for most of the second stanza. The Cats held a 10-point lead with five minutes to play in the contest but the Lady Cavaliers went to work in the final minutes of the game, outscoring the Cats 10-2. Stacey Lee cut the RSU lead to two points with a three-pointer from the top of the key. RSU answered with a layup by Adrianna Leatherbury to push the lead to four points. Kalie Lucas drove to the basket and hit a layup to cut the deficit back to a bucket but the RSU defense fended off the Lady Cavaliers to preserve their seventh conference win of the season.

The Hillcats dug a hole to start the first half, falling behind 7-0. Logan Froese came in off the bench and put the Cats on the board with consecutive layups to cut the deficit to three points. Sierra Cornwell notched a steal and a layup to tie the game 9-9. The teams traded buckets until the eight minute mark where the Hillcats used a 16-4 run to take a 13 point advantage. RSU ended the half with a 39-27 lead.

The Hillcats nabbed 19 steals in the contest led by Sierra Cornwell who swiped nine steals. The Preston, Okla. native tied the single-game record for steals that she set earlier this season against Peru State.

Froese led the Cats in scoring with 12 points off the bench. Kelby Fritz rounded out the double digit scorers with 11 points and a team-high four assists.

The Lady Cavaliers edged RSU on the boards 46-45 as Leticia Silva tallied a double-double with 13 points and 11 rebounds. Ayrionna Taylor led SGU in scoring with 14 points.

Rogers State (15-5,5-1) will head to West Texas next week to take on Wayland Baptist on Thursday night at 6 p.m. and Lubbock Christian on Saturday at 1 p.m. The games will be streamed live on the Hillcat Network at www.rsuhillcats.com/live and on RSU Radio 91.3 FM.