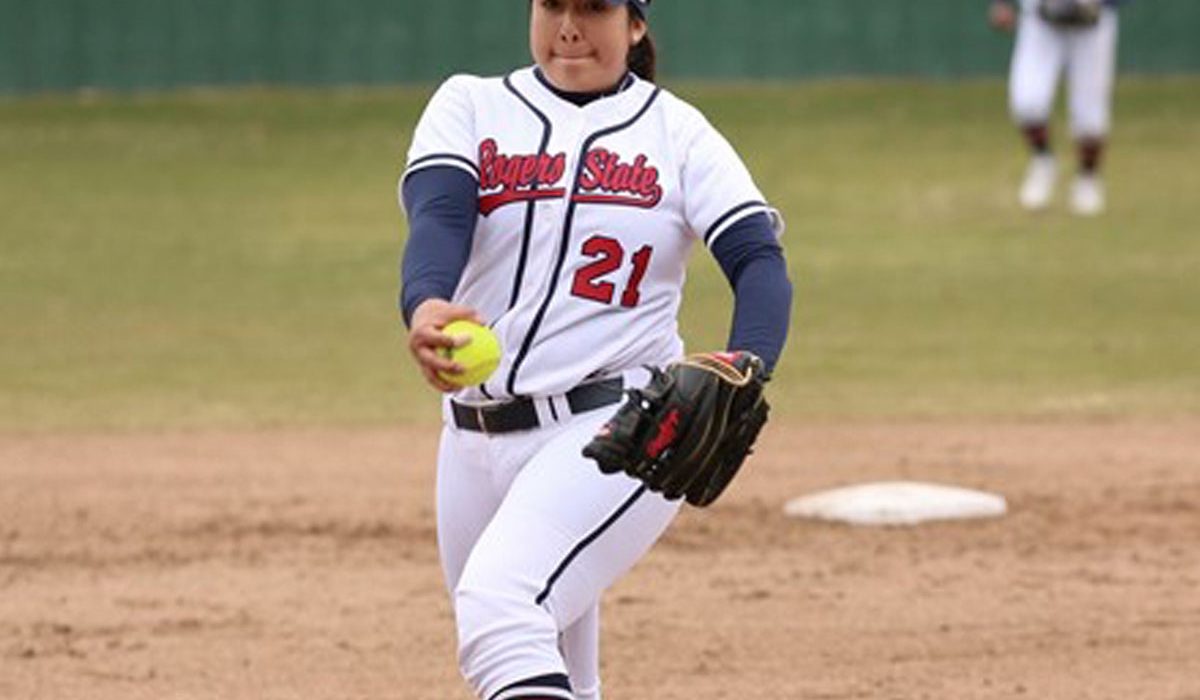 CLAREMORE – The Rogers State Softball team picked up a doubleheader split with Lubbock Christian University on Wednesday at the Diamond Sports Complex, picking up a convincing run-rule victory in game one before falling in the seventh in game two 9-7.

In game one, the Hillcats used a dominating performance from Andrea Morales in the circle and the largest offensive over Lubbock Christian output in program history to win 10-0.

Andrea Morales set a pair of school records for the Hillcats in a dominating performance in game one. Morales started the game with a school record 10 consecutive strikeouts.

In the third inning, Morales set another record, becoming the first Hillcat in the NCAA era to record the perfect inning, recording three strikeouts on nine pitches.

Lubbock Christian broke up the perfect game in the fourth, but Morales would add another strikeout, recording the first 11 outs via the strikeout before a pop up to first base in foul territory ended the inning.

Morales finished with 12 strikeouts in the victory, giving up just one hit.

The Hillcats capitalized on a two-out, bases-loaded error in the bottom of the first, as Tailee Reding scored to give the hosts the lead.

Rogers State would add to their lead in the second as Mikayla Waggnor hit a three-run homerun and Sierra Skaggs followed it up a few batters later with a two-run homerun to put the Hillcats ahead 6-0.

Reding would hit an RBI groundout in the third to score Jaylan Gibson.

In the fourth inning, Rylee DeLozier hit a solo homerun to put the Hillcats up 8-0. The Hillcats would score two more runs on a Katelyn Gamble single and an error by the left fielder as Gibson and Gamble both came around to score.

In game two, the Hillcats fell behind as the Lady Chaps led off with a lead-off triple and were able to plate the run in the top of the first.

The Hillcats would tie the game in the bottom of the second as RSU successfully executed the squeeze as Taylor Malett bunted home Faren Walker.

Lubbock Christian would go back in front in the third with a solo homerun, but Rogers State answered back asAllie McFetridge hit a monster two-run homerun to left center to put the Hillcats ahead 3-2.

Danelle Day singled home Gamble in the fourth inning to put the Hillcats up 4-0. Rogers State would extend the lead even further in the fifth inning as Malett hit a two-run homerun to put the hosts ahead 6-2.

The Lady Chaps would use back-to-back homeruns in the sixth inning to cut the deficit to 6-4, but the Hillcats would answer right back as Waggnor hit her second homerun of the day to put the Hillcats back ahead by three.

However, it would not be enough as the visitors would capitalize on a two-out error to score five runs in the top of the seventh, going ahead 9-7.

Rogers State will hit the road, but remain in Heartland Conference play, as the Hillcats travel to San Antonio, Texas for a three-game series at St. Mary’s University. The Hillcats will face the Rattlers in a doubleheader on March 16 starting at 1 p.m., with game three of the series coming at noon on March 17.