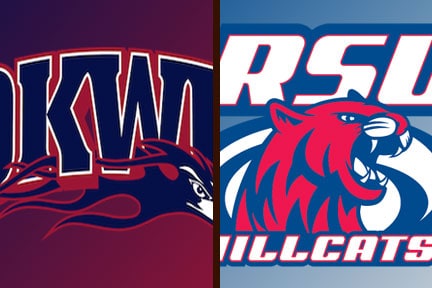 BARTLESVILLE, Okla. – On the road for the third time in the early season, the Rogers State women need extra time to put away Oklahoma Wesleyan Tuesday afternoon for the 3-2 victory.

RSU claimed the early advantage as Jordan Beasley crossed the ball into Carley Johnson who netted it just past the OWU goalkeeper just 16:22 into the match.

Senior Lauren Hager took a Beasley through ball and weaved past through the defense to score 15 minutes into the second half to push the Cats up 2-0.

The Eagles put on the attack and benefitted with a Laura McKnight goal in the 77th minute from 30 yards out off a clear out by the Hillcat defense. Four minutes later OWU answered with yet another goal on a corner kick by Alyssa Deutsch to tie the game at 2-2.

In the extra period it was freshman Taylor Hallford with the game winner, her second in as many games. Beasley went streaking down the right side of the field and found Hallford on the backside who buried the ball into the net for the golden goal in the 92nd minute. Beasley, a Lafayette, La. native, tallied three assists on the day for the Cats.

Rogers State (4-1) will return to action Friday in Muskogee, Okla. as the Cats face Bacone College at 1 p.m. For more information on Hillcat Soccer visit www.rsuhillcats.com.

BARTLESVILLE, Okla. – No. 13 Oklahoma Wesleyan proved to be too much for the Rogers State men’s soccer team as the Eagles claimed the 2-0 victory Tuesday evening.

The first goal for the Eagles came in the 35th minute as Jack McGowan found the back post from 20 yards out past a stretched out Nate Inger. OWU struck again in the second half off a Lucas Cordeiro corner kick that was hammered home by Andres Gacharna off an Inger save in the 81st minute to put the Eagles in the lead 2-0.

OWU outshot the Hillcats 21-11 as Eagle goalkeeper Jack Ord made seven saves. Inger made five saves for RSU including four in the second period. The Eagles totaled seven corner kicks including the goal by Gacharna that put the game away for OWU.