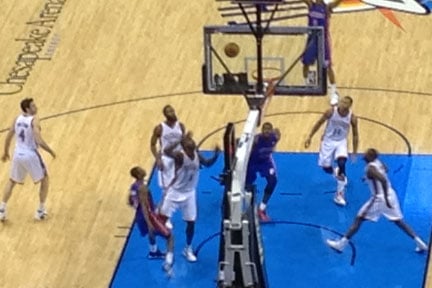 After a three-game road trip in which the Thunder saw only their third loss of the season, they were glad to be home against the visiting Detroit Pistons in Chesapeake Energy Arena on Monday night.

The Pistons relinquished their only lead of the game only a little over a minute and a half into the first quarter, and then things went downhill fast.  With a final score of 99-79, the Thunder made it look easy in their 14th win of the season.

Early in the first quarter, Thabo Sefolosha was called for his second foul so James Harden made an early appearance in this game with over eight minutes to play.  On a night when Harden ended up shooting 5 of 6 from long distance and 8 of 11 overall, that was bad news for Pistons coach Lawrence Frank and his team.

Harden and Russell Westbrook led the team in scoring with 24 points apiece. It was Westbrook’s first home game since extending his contract with the Thunder for another five years.  Kevin Durant followed, shooting 9 of 13 for 20 points.

On the defensive end, the Thunder played with their characteristic toughness to hold the Pistons to only 12 points in the first quarter and 33 at the half.  Serge Ibaka and Kendrick Perkins both continued their streaks of consecutive games with at least one block.  Ibaka, however, did not stop at one.   He had five blocks to go along with his 10 rebounds.

Serge was the only starter to see minutes in the fourth quarter, and all active Thunder players saw action on court.  Cole Aldrich made the most of his 10 minutes with four points, six rebounds, two steals, and a blocked shot.  On a night when Nick Collison suffered a sprained ankle, it was good to see one of the younger guys stepping up.

The Thunder will take on the New Orleans Hornets in the Chesapeake Energy Arena on Wednesday night before playing eight of their next nine games on the road.