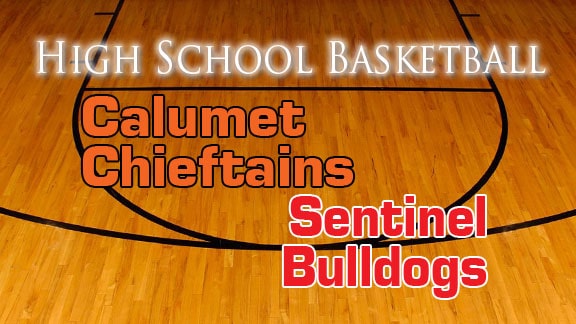 Led by freshman Riley Island’s 21 points, the Chieftains of Calumet led wire-to-wire to down the Sentinel Bulldogs 56-35 in the first consolation semifinal of the West Central Tournament in the Pioneer Cellular Event Center on Friday evening.

Calumet raced out of the gates with three of their five starters getting on the scoreboard early. Jarred Tech led the way, scoring all five of his points for the night in the first frame, including one make from beyond the arc. Sentinel, staggering from Calumet’s hot start, only recorded two points in the quarter thanks to senior Chase Johnson. The Chieftains would end the frame with a 12-2 lead.

The Chieftains continued to pour it on in the second quarter of action, recording another 15 points in the quarter. Aaron Thornton turned up the heat, knocking down a trey and finishing from the charity stripe for nine points to lead the onslaught. Island, proving to have a quick first step and an eye for the pass dished out three assists, with two benefitting Thornton. Corbin Stewart and Conner Smith combined for nine points to the benefit of the Bulldogs, but Calumet would head into the locker rooms holding a 27-13 advantage.

Island and Thornton continued to be a lethal combination, dominating from both inside the paint and outside on the perimeter. Island made a living on drives into the lane where he was unlucky to see several shots rim out. However, he twice sucked in the defense to give Thornton enough airspace to knock down his second and third 3-pointers of the game while Island still earned six points himself. Sentinel had a more balanced approached with four players scoring, but only one make came from behind the 3-point line and the rout was on.

Going into the fourth quarter with a 44-22 lead, Calumet head coach Eric Carr decided to spell his two most lethal scoring threats for the majority of the frame. However, led by CJ Combs’ six points, Sentinel tried to make it a game, scoring 13 points in the quarter. With the Bulldogs within striking distance, Carr unleashed Island and Thornton yet again, with Island pouring in eight points, and Thornton four, to ice the game for good.

Island finished with a game-high 21 points while his partner-in-crime, Thornton, finished with 19. Sentinel had nine different players get on the scoreboard, led by Conner Smith with nine. Combs was second on the team with six.

Both teams will complete the West Central Tournament tomorrow, with Calumet advancing to the consolation final.