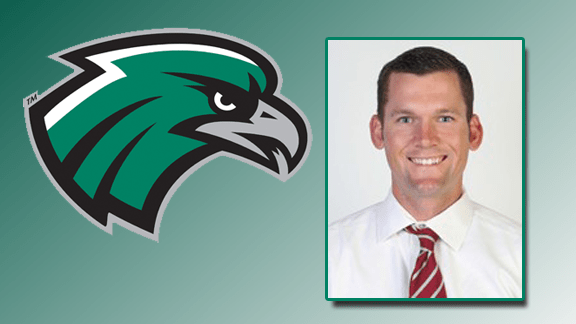 Hendrick has served as NSU’s pitching coach for the past two seasons, and he will take the reins following the resignation of former coach Travis Janssen.

“This is a great opportunity for me. I could not be more excited to call NSU home for many years to come,” Hendrick said. “First and foremost I want to thank my wife and the rest of my family for the constant support over the years. Secondly, I want to thank Coach Duckworth and (NSU President) Dr. Steve Turner for putting their faith in me to be the next head baseball coach. Lastly, on behalf of our former players and myself, I want to thank Travis Janssen for not only everything he has done here at NSU, but also everything he has done for me. It truly was a blessing to work beside him over the past two years.”

The RiverHawks have made back-to-back trips to the MIAA Championship during Hendrick’s time with the program and have posted two of the greatest pitching seasons in school history.

The 2015 pitching staff posted a sub-5.00 ERA (4.86) for the first time in NSU’s NCAA era (since 1996) and shattered the school record for most strikeouts in a single season (350). Northeastern State also registered an opposing batting average of .277, which was the lowest since 1996. Closer Jake Kern also tied the school record with 10 saves and posted a stellar 1.80 ERA.

“The program is headed in the right direction. I plan to build upon the progress that has been made over the past four years,” Hendrick said. “The principles that have defined NSU baseball during this time are cornerstones of how we will define ourselves for years to come. We want quality people who are united in purpose. We want to continuously improve our program, and want to continue being a source of pride for this university. We have great players returning, as well as a very strong recruiting class. I am very excited to start getting all of those guys on campus and get to work.”

During his first year at NSU, Hendrick helped the pitching staff boast the lowest ERA in more than 12 years (5.56). He was also instrumental in coaching pitcher Ryan Helsley, who became the highest drafted player in school history when he was selected in the fifth round (No. 161 overall) of the 2015 Major League Baseball Draft by the St. Louis Cardinals.

Helsley was the lone underclassman named to the 2015 All-MIAA First Team, and he became just the third NSU baseball player since 1996 to earn a conference specialty award when he was named the 2014 MIAA Freshman of the Year. Helsley broke the school record for strikeouts in a single season when he fanned 95 batters in 2015.

“Knowing coaching changes occur, I have been watching Jake Hendrick conduct business the past two years to determine his readiness to become a head college baseball coach,” Duckworth said. “In addition to observations, Jake has been excellent in multiple interviews during the search process. As I have been making phone calls, it is evident college coaches in the business have taken notice of Coach Hendrick’s work ethic, knowledge, integrity, recruiting abilities and respect for the game. I am excited to see Coach Hendrick maintain the momentum of RiverHawks baseball, while diligently working his plan to take our program to the next level in both the MIAA and in this region.”

Hendrick spent summer 2013 as the head assistant coach for the Charles Town Cannons in Charles Town, West Virginia. He was in charge of defensive positioning and was the third-base coach for a team that finished second in the North Division.

The Naperville, Illinois, native was the pitching coach in 2012-13 at Marion Military Institute in Marion, Alabama. MMI is a Division I JUCO member of the Alabama Community College Conference.

Hendrick also served in summer 2012 as the pitching coach of the Winchester Royals in Winchester, Virginia. The squad captured the North Division regular-season title and won the North Division Pennant. Winchester was ranked as high as No. 8 byPerfectGame Baseball and finished with a 36-16 record after advancing to the championship of the Lineweaver Cup playoffs.

Prior to his stint with the Royals, Hendrick assisted at Stillwater High School in Stillwater, Oklahoma, from 2009-12. He helped lead the squad to a state tournament bid in his final year.

Hendrick is the son of Bill and Karen Hendrick and has four younger siblings, Richard, Kelley and Kasey. He is married to Danielle Nichols.