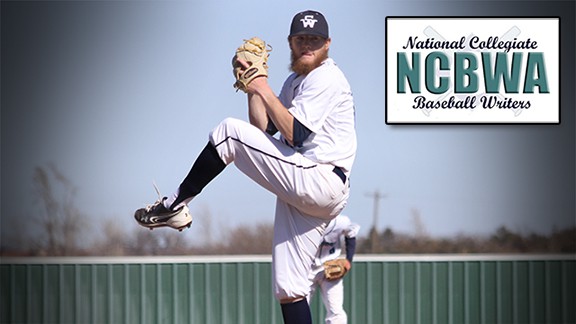 DALLAS, Texas – The National Collegiate Baseball Writers Association (NCBWA) released Thursday its NCAA Division II National and Regional Players of the Week awards for the week ending on April 19. Among the athletes recognized was SWOSU’s Jon Chidester, who collected the Pitcher of the Week award for the Central Region.

This is the second time in his career that Chidester has claimed the regional honor, having also done so on March 24, 2015. He receives this award after winning his second straight start and tossing his third complete-game of the season during a 5-1 victory over Arkansas Tech on Friday night. In the contest, Chidester allowed six hits while striking out a career-high 14 ATU batters, tying for the most by a Great American Conference pitcher this season.

The victory improved Chidester to 7-3 on the year, which ranks him first in the conference with seven victories. He is also third in the conference with a 2.47 ERA and he leads the Bulldogs with 66 strikeouts. The strong performance also earned his fourth career GAC Pitcher of the Week award, and the first of 2016. Additionally, he and teammate Jacob Spring have both been named candidates for the D2 Baseball HERO of the Week, a fan-voted award that can be seen at HeroSports.com.

A native of Rhome, Texas, Chidester is scheduled to be on the hill for SWOSU on Friday at 2:00 pm as they open their three-game GAC series against Harding in Weatherford.