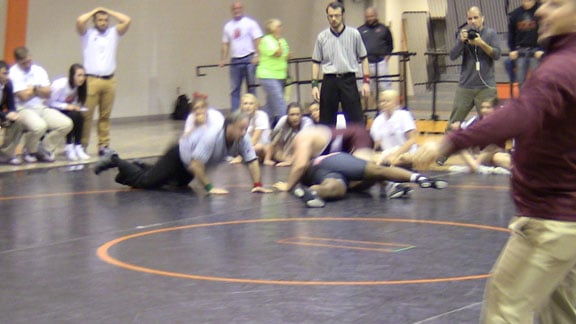 It came down to one final bout and with his team trailing by three points, Garrett Beier had already decided what he was going to do. He was going for it all.

And that’s just what he got.

No. 2 Perry rallied from a 28-22 deficit in the final two weights and defeated No. 1 Plainview, 30-28, in the Class 3A Dual State Wrestling Tournament on Saturday in Cushing. It is the seventh straight title for the Maroons and 16th overall.

Nothing came easy for either team in the title match and coach Ronnie Delk said he knew his team and coaching staff had worked hard to earn the win.

“Hats off to Plainview,” Delk said. “They fought their tails off. It was just a chess match the whole time. It could have easily went their way and luckily it went our way. They’re a great team.

“When you wrestle a team that’s as talented as they are, you have to move guys around and put them in places that benefit you. And we did it.

The score was tied at 22 apiece when Plainview’s Ruston Duke earned a fall over Robert Speikers at 195. The 28-22 lead put Plainview in a good position and Perry had to gets wins in the final two weights to tie or win.

Delk expressed his feelings about the match at that point in knowing who was on his squad.

“Because that guy right there, he was like a man possessed over there. I was like, ‘All you have to do is get a major.’ And he said, ‘I’m pinning the guy.’ And I said OK, and I walked away from him.

“And I knew we had to get two wins. I knew Matt was going to get a win, hopefully get a fall, that would’ve made it nice. Then he went out there and got the win and Garrett Beier does what Garrett Beier does.”

Jones earned a hard-fought 2-1 decision over Darric Caruthers at 220 and pulled his team to 28-25.

Then it was up to Beier, who came out quickly and took a 4-1 lead over Dorian Fagan.  He pinned Fagan 45 seconds into the second period.

Perry got the six points for the win, but the team lost a point for excessive celebration at the end.  The final score read 30-28.

Delk said winning the championship again did not get to be a commonplace thing and was already looking ahead.

“No, it just gets more and more exciting, but we’re not done by any means. We’ve got one more at the very end.

“Dual state means a lot to us, but that one at the end is important. We’re going to get 41.”

The Class 3A regional tournaments take place Saturday, Feb. 21, in Marlow and in Sperry, where the Maroons will begin their attempt to defend their title.