Kerr puts up 41 points in OPSU win over Barclay 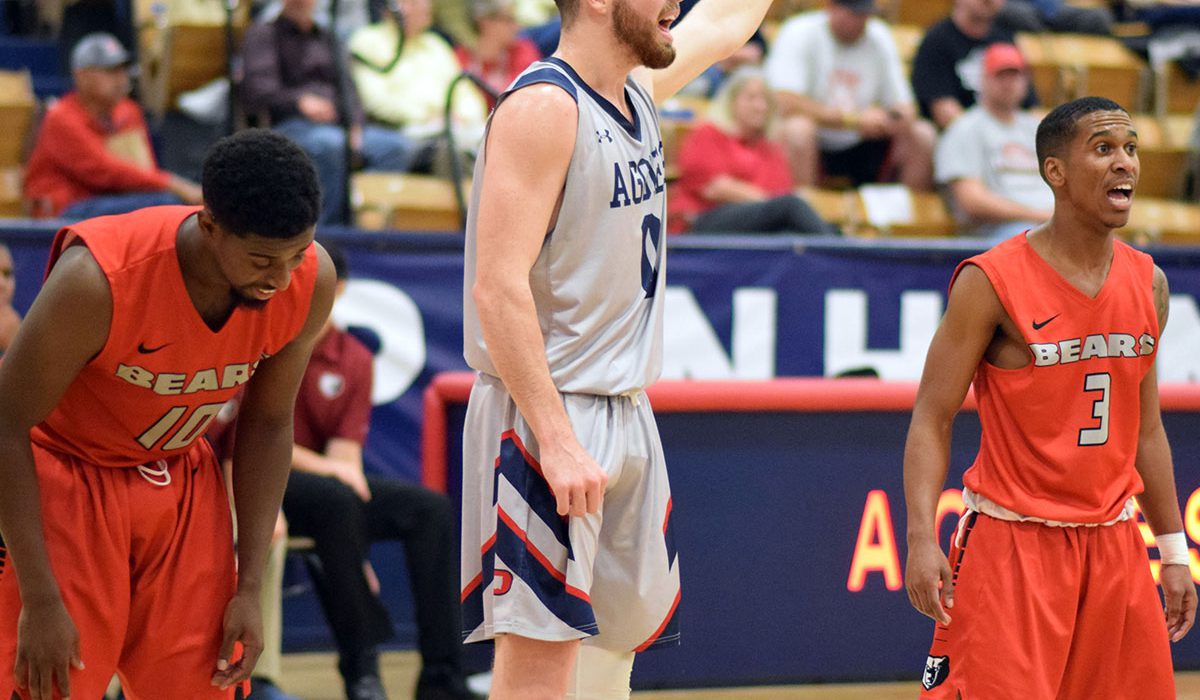 Jace Kerr led the game in scoring Tuesday night, putting up a career-high of 41 points in the Aggies victory over Barclay College. - Photo: Rylee Higgins.

GOODWELL.—Sophomore Jace Kerr lit up the scoreboard with a career-high of 41 points in Tuesday night’s matchup with Barclay College. Kerr’s efforts gave the Aggies the edge to pull out a ten-point victory 105-95 over the Bears.

Kerr claimed 22 of the Aggies’ first-half points, shooting 9-13 from the field and 4-4 from the line to hold a 50-46 advantage at the break. The Bears put up solid shots to connect on 19-31 first-half attempts, for a 61.3 percent shooting average; the Aggies averaged 45 percent from the field in the first period of play. Also outmatched at the boards, the Aggies trailed in rebound margin 18-12 in the first 20 minutes.

The Aggies improved to a 58.3 percent shooting average after the break, but failed to score on long-distance shots, going 0-9 from beyond the arc. The Bears landed 7-12 three-point shots and averaged 57.6 percent from the field in second-half shooting. At the line, Panhandle State prevailed with a 76.5 percent free throw average, adding 13 points from fouls. The Aggies won the turnover margin 28-20 and scored 35 points off turnovers; Thomas Ellis led the game in steals with four.

Freshman DK Sumo also had a breakout game, scoring a career-high of 26 points in Tuesday’s performance. Sumo led the game in three-point shots, scoring on four of nine attempts; he made five shots from the field and hit on 4-5 free throw attempts. Jaedon Whitfield earned his fourth double-double of the season with 19 points and a game-high of 15 rebounds; Whitfield also offered two assists and had two steals in the game.

While disappointed in his team’s defensive efforts, Head Coach Jerry Olson expressed, “It was a win. Jace Kerr had a really, really good game. Defensively we were bad, and we have to get better or we’ll be in for a long year.”

The Aggie men’s team will take the court in Anchor D Arena again this Saturday, Nov. 18 for a 7 p.m. matchup against Manhattan Christian College.