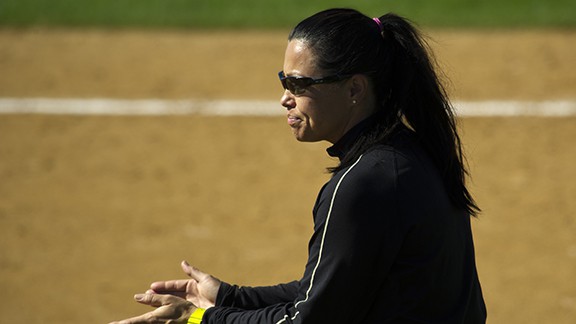 WEATHERFORD, Okla. – SWOSU Athletic Director Todd Thurman has announced the hiring of Kim Maher to lead the Bulldog Softball program. Maher, who becomes the fourth coach in program history, brings with her a wealth of experience from the collegiate, professional and international levels of softball.

“We are excited to have the opportunity to have Coach Maher lead our softball program,” Thurman said. “It’s not every day that you have the chance to have an Olympic Gold Medalist join our university family and she has a great deal of knowledge and experience that will be very valuable for the future of our program.”

In her last collegiate coaching position, Maher (pronounced ‘Marr’) spent eight seasons as the head coach at NCAA Division I Purdue University, leading the Boilermakers to 240 victories from 2006-13. While at Purdue, Maher led her team to the NCAA Tournament in 2008 and 2009, the first and only tournament appearances in program history. Her teams posted a record of .500 or better seven times, including six 30-win seasons, and they defeated nine teams ranked in the Top 25. In 2008, Maher and her staff were named the Midwest Region Coaching Staff of the Year and she coached 18 players who earned All-Big Ten honors, eight All-Mideast Region honorees and two Academic All-Americans.

The first coaching job for Maher came as an assistant coach at California-Berkeley, where she helped guide the Golden Bears to the Women’s College World Series in each of her six years from 2000-05. While Maher was on staff, California won the 2002 National Championship and finished as the national runner-up in 2003 and 2004 and they were named the NFCA/Speedline Coaching Staff of the Year in 2002 and the NFCA Regional Coaching Staff of the Year in 2003.

“I want to thank Coach Thurman and the rest of the athletic department for giving me the opportunity to coach at SWOSU,” Maher said. “As with anything new, there will be challenges and change but it’s through these changes where growth can happen. I’m excited to get another opportunity to coach at the collegiate level and in those years I’ve been away I have come to the realization of how much I missed it and wanted to get back into it, but only if the right opportunity presented itself.”

Maher played shortstop at Fresno State from 1991-94, earning second team All-America status in her senior season and she finished her career as the Bulldogs’ all-time leader in home runs (31), RBI (181), runs (162) and doubles (49). Maher was a four-time all-conference and two-time all-region honoree while helping Fresno State to three College World Series appearances (1991, 1992, 1994), including third-place finishes in her first two seasons. In 1993, Maher led the Western Athletic Conference in slugging percentage, runs, hits and home runs, helping her earn Fresno State’s Female Athlete of the Year award.

During her college years, Maher also played for the Redding Rebels, which won the Amateur Softball Association’s (ASA) Major National Championships in 1993, 1994 and 1995. She set the ASA national home run record with five at the 1994 National Championships and she garnered ASA Women’s Major First Team All-America honors four times (1993, 1994, 1997 and 1998) while being named the league’s Most Valuable Player in 1994.

After graduating from Fresno State, Maher founded Extreme Hitting, a company that conducted softball clinics for youth of all ages, including individualized lessons and workout programs intended to enhance performance. She also continued to compete on the international level as a member of the USA Olympic and National Teams from 1994-99. Maher participated in several international competitions and won an Olympic Gold Medal as a member of the 1996 USA Softball team. She also earned gold medals at the 1995 Pan American Games and the 1998 ISF World Championships.

In addition to competing on the international stage, Maher helped launch the Women’s Professional Softball League (WPSL) and she competed professionally from 1994-99. Maher played for the Florida Wahoos and helped the team to the league title in 2000 while also being named to the league’s all-star team.

Since leaving Purdue, Maher moved to western Oklahoma to be near her family and she returned to school to earn an Education degree from SWOSU. Most recently, she has served as a Physical Education teacher at Washington Elementary in Clinton, Oklahoma.

“Location was the number one determining factor,” Maher said about her decision to return to coaching at SWOSU. “My parents are older now, but they live 20 minutes from Weatherford and I want them to be able to watch me coach. When I was at Purdue, I would see my parents maybe once or twice a year and now they should be able to come out to all of our home games. Time has put a lot in perspective for me and family is my number one priority.”