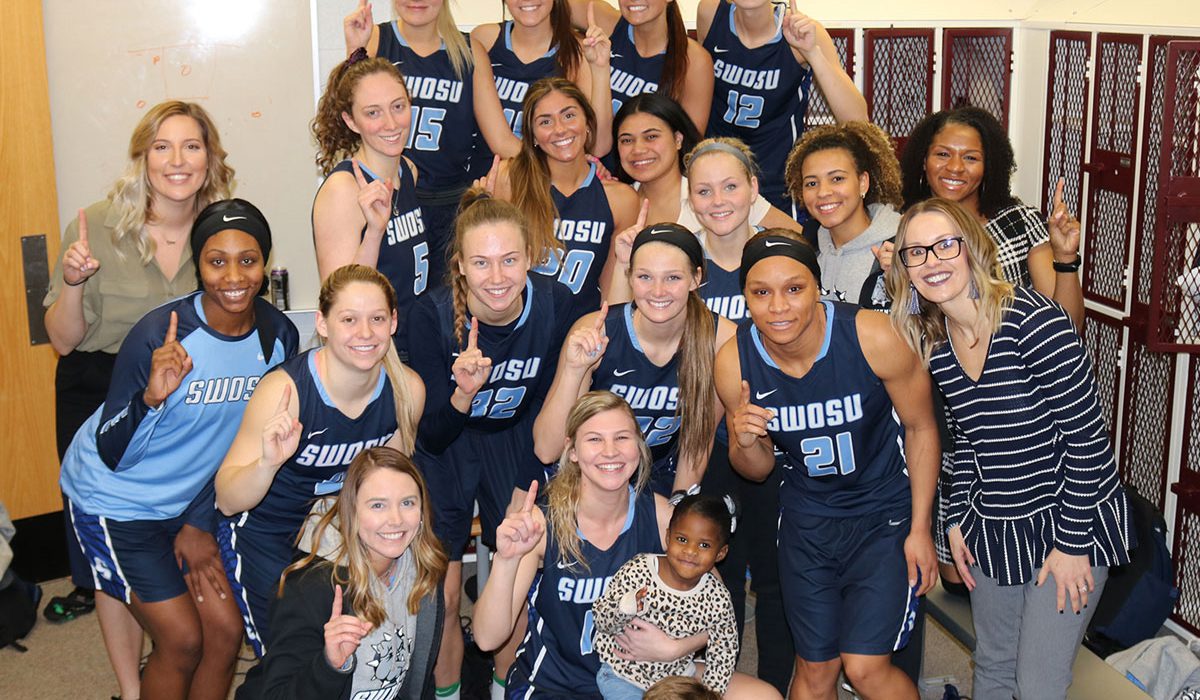 The Lady Bulldogs had to overcome a first-half deficit of 10 points, as SNU clamped down defensively and led 28-18 midway through the second quarter. Hailey Tucker and Alexa Harvey hit two three-pointers apiece and helped SWOSU to a halftime advantage of 37-34.

The third quarter featured one of the lowest-scoring periods of the season for SWOSU, as both teams scored nine points and went to the fourth with the Lady Dawgs still leading by one possession. Taylor Hedrick scored 10 of SWOSU’s 15 points in the fourth quarter, including a three-pointer that made it an eight-point game, 56-48, with 5:20 to play. The Lady Bulldogs were limited to 23.1% shooting in the fourth quarter, but they got to the free throw line and converted on 8-of-11 opportunities and held on to secure their championship.

Hedrick and Hayden Priddy tied for team-high honors with 16 points apiece while Hailey Tucker added 10 points, seven rebounds and a season-best five blocked shots. Tyra Aska struggled offensively, but picked up the slack on the boards with a season-best nine rebounds, and Bethany Franks finished with seven rebounds and three steals in addition to four points. Alexa Harvey was SWOSU’s leading scorer off the bench, knocking in 2-of-4 three-point attempts for six points.

In a game where they struggled offensively, the Lady Bulldogs made up for it with pressure defense as they forced the Crimson Storm into 26 turnovers, including 13 steals. SWOSU converted those turnovers into 28 points, which was the biggest advantage of the game after SNU had just six points off of the Lady Dawgs’ 11 turnovers.

SWOSU extends their winning streak to 23 straight games, improving to 23-1 on the year and 18-0 in league play with four games remaining in the regular season. With a five-game lead in the GAC standings, the Lady Bulldogs have now won their 17th regular season championship in program history and second straight in the Great American Conference.