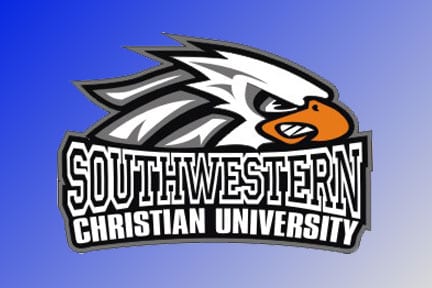 Second-seeded SCU battled backed from a 16-point deficit in the first half and held off a late charge from the No. 7 seed en route to the two-point victory. The Lady Eagles got clutch free throws down the stretch from freshmen Andi McGill and Grace Hadley and improved to 18-17 on the season.

The Lady Eagles outscored Southern Wesleyan 22-16 in the paint and 9-2 in fastbreak points on the night. The two teams combined for 23 made 3-pointers in the contest.

Southern Wesleyan rushed out to a 20-4 lead early in the game.

McGill scored back-to-back buckets and sparked a 23-7 SCU run beginning at the 7:56 mark of the first half. The Lady Eagles drained five 3-pointers during the run and tied the score at 32-32 with 1:31 to go in the period.

Southern Wesleyan’s Chelsie Waters hit a runner at the buzzer to give the Warriors a 37-35 lead at the break.

SCU ran off a 10-0 run and took control of the game at the 9:56 mark of the second half. Taylor Estep and Hadley each hit from 3-point range to fuel the run.

3-pointers from Brooke Strickland and Waters gave Southern Wesleyan a one-point advantage with 1:02 to go.

Janz came up with a steal to give SCU the ball with 23 seconds left.

After drawing a foul with 12 seconds remaining, McGill knocked down a pair of free throws that gave the Lady Eagles a 67-66 advantage.

Hadley corralled a missed jumper from Waters with seven seconds to go and converted one-of-two from the charity stripe to ice the game for SCU.

With the win, the Lady Eagles advanced to the semifinals where they will meet the No. 3 seed Bethesda (Calif.) at 7:45 CDT Thursday.

Bethesda punched its ticket to the semifinals by defeating tournament host Grace (Ind.) 87-82 in the third game of the tournament.