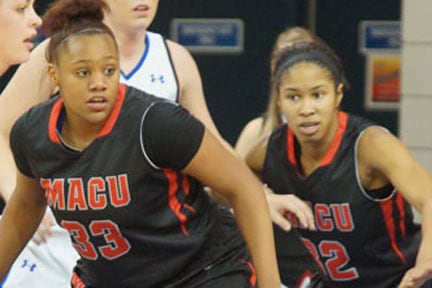 Mid-America Christian took down Southwestern Assemblies of God, 97-79, in Waxahachie on Saturday to move to 4-0 in the Sooner Athletic Conference.

The Lady Evangels have now won three of four contests all-time against SAGU, but more importantly, its undefeated league record through its first four games is the best start in program history.

MACU head coach Marcus Moeller is pleased with his team’s efforts on the year and on the night.  But the victory came about differently than how he might have drawn it up.

“It was an interesting game,” Moeller said.  “It was a tale of two halves. Basketball is not a game of ‘perfect,’ and that’s a good thing for us.

The SAGU defense held the hot-shooting Lady Evangels to just 29 percent from the field in the first half, controlling the pace and forced 15 turnovers from a team that has been averaged fewer than seven per game.

“We weren’t really able to push the tempo the way we tried to.  That’s a credit to them. They really had us on our heels.”

But Moeller and the Lady Evangels regrouped at the break, and in the second half, the team started to get some shots to fall.

And the coach was able to keep perspective on how things look from the outside.

“I don’t know if we really made any great adjustments.  I think we had a couple of kids really step up and make some big shots in tough spots.  I was proud of our effort in the second half.  We finally got a little momentum and it snowballed.”

MACU outscored the hosts, 41-25, in the second half, thanks in large part to some of the team’s three-pointers connecting.  The Lady Evangels made 12 of the 37 shots taken outside the arc.  They shot only 32 times from two-point range.

Moeller joked that he isn’t sure that makes his team a three-point shooting team.

“I think we think we’re a three-point shooting team.

“When you play against a zone for that long and do as poor a job as we did attacking the seams and the gaps and getting the ball to the short corner and the high post, you end up taking a lot of threes on the perimeter.  We’re fortunate in that we have several kids who can shoot it.  I would like to see us not rely on that as much.

The Lady Evangels are averaging nine made three-pointers per game, which is in the top 10 in the NAIA.  But the 30.6 three-point percentage isn’t something he likes.

“But tonight was a night that we got a lot of open good looks and we had to take them and fortunately in the second half we were able to make quite a few of them.”

Junior guard Ashlee Ferguson led the way for MACU on the night with five made three-pointers and a team high 17 points.

Mid-America Christian has played just two games since the calendar turned and Moeller said he knows his team has not yet arrived.  But they have done what they can to put themselves in a position to succeed.

“In the preseason, I was hopeful that our non-conference schedule would help us prepare for the rigors of the SAC schedule,” Moeller said.  “I think one of the things we did was to challenge ourselves to go play some road games and neutral court games.  That has given us the ability to have some confidence on the road.”

And the Lady Evangels have been unscathed in league so far.

“Going 4-0 in the conference is great, as a whole.  But the thing I’m proud of is that two of those came on the road.  Any time in any league you have to go on the road and play, it’s never going to be easy.  I feel like we’re play confidently on the road and our non-conference games did a good job preparing us.”

MACU had three losses in nine games outside the SAC, but Moeller was comfortable with his team’s performance.

“If you look at our three losses, one came to an NAIA Division II team (Southwestern College) that is a top 10 team in the country and two NCAA Division II schools (East Central, Rogers State) that each challenged us in road games.”

The job isn’t done yet

The schedule doesn’t get much easier.

“We have four of our next five that are on the road against very, very good teams in our conference.  All we’ve really done at this point is to set ourselves up to have a chance to do some great things.

“That’s one of the things about the Sooner Athletic is that you end up in the top four or five, you certainly are going to end up with a chance to compete on a national level.”

And he’s ready to deflect the attention from him to his charge.

“I’m really proud of our kids and that they’ve taken care of business,” Moeller said.  “When we’ve had opportunities to win games, we’ve done so. All of the credit, and I mean this, all of it goes to our kids for locking in when it was important.  We’re pleased to be where we are right now.”

It’s now the midway through the schedule and Moeller has broken down the big picture into smaller segments for focus.

“You have to break the season up into three individual seasons: the nonconference, the conference and the postseason.  And you hope to build from one step to the next.

“And I don’t know much as a 28-year-old first-time head coach, but I know that looking forward too far will get you in trouble.  I know people in the media don’t like cliché answer, but quite honestly if we can get our kids and our staff focused on just the next step, that is the best we for us to handle it.

“For us, the next step is a super big game on the road against a very talented Oklahoma Baptist team on Tuesday.”

The Lady Evangels travel to Shawnee to take on the Lady Bison at 6 p.m. to try to extend their already historic season one more win.