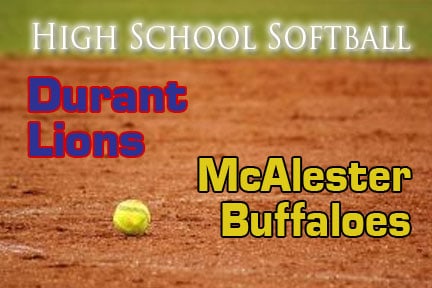 MCALESTER – Durant had two three-run innings to put six runs on the board at McAlester on Tuesday, but didn’t need that many.

Sydney Hampton started for the Lady Lions and took the win as Durant beat McAlester, 6-0.  The sophomore pitched 5.0 innings and recorded four strikeouts, giving up no runs, and moved her record to 5-4.

Kylie Williams came on in the sixth and continued the shutout while notching a strikeout as well.

Hampton received all the run support she needed when sophomore Breanna Simmons hit a two RBI double in the top of the second.  She cam home as well following a past ball.

The Lady Lions put up a three-spot again in the seventh.  Junior catcher Macy Powell lifted a shot just over the left field wall, scoring Simmons as well.

That was followed by Destinee Lewis home run to almost the exact same spot in the next at-bat.

Adisyn Webster pitched the complete game for the Lady Buffs.

Durant (12-8) and McAlester (5-13) both see action next at the Durant Lions Tournament on Friday and Saturday.