Lady Pirates always have something to strive for 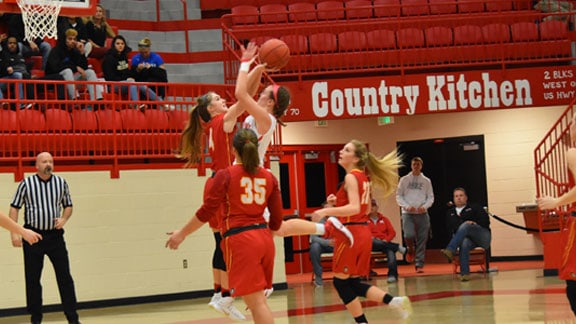 Dale senior Taylor Thompson (4) blocks a shot at the Kingston NYC, while fellow seniors Hannah Ash (21) and Dani Manning (35) get ready to get the ball. Photo by Vicki Droddy.

To say the season has been good so far for the Dale Lady Pirates has to be an understatement.

The No. 1 girls basketball team in Class 2A is undefeated at 17-0 and is coming off a tournament championship in the Kingston New Years Classic. And the Lady Pirates have two more tournament titles for the trophy case this season as well.

This includes the prestigious Bertha Frank Teague Mid-America Classic, which was a repeat performance for Dale.

“I’ve been very proud of the girls as far as all the challenges they’ve met so far,” Forsythe said. “I believe we’ve maybe played eight or nine ranked teams and I want to say that all of them but one were in the top eight. It wasn’t like they were all ranked really low.”

That number includes three teams ranked No. 1 at the time and a No.3 and No. 4, as well. Dale defeated the No. 1 team and defending state champion in consecutive days in the Mid-America Classic, taking down Class B Lomega, 56-50, and then Class A Seiling, 50-43, before besting Class 4A No. 3 Ada, 49-48, in the championship game.

“It’s been really good for us. Those are the type of games that you learn from, that’s you’re able to pull from as a coach and you learn the things you’re going to have to work on down the stretch. But I’ve been very, very proud of the girls so far.”

With the kind of success that is perennially present at Dale, it may seem like a challenge to keep the players motivated. The program has won seven state championships, with the most recent coming in 2010.

But Forsythe said the schedule itself has a way of providing motivation on its own.

“I truly believe our schedule is probably the toughest in 2A. I’d put our schedule against anybody’s. You can’t take anybody for granted. We’ve always got somebody looming and so you always have to stay on your toes and ready to go.”

Forsythe said the girls have a lot of pride and heart. And they don’t have to look far to build on tradition.

“A lot of these girls have mothers and aunts and grandmothers that played here, and they take a lot of pride in that. They want to be successful and they want to play well. And I think they do that.

“I’m just blessed to be a part of it. I enjoy it and it’s a great place to be. It’s a great school with a great administration. We have really good kids that are easy to coach and I’ve been really proud of them.”

The 2016-2017 edition of the Lady Pirates team has been built in the shadow of tradition, but still from the ground up.

“This group of seniors was kind of thrown in the fire their freshman year,” Forsythe said. “Because the year before we had maybe five starters and seven total players graduate. That next year we were very inexperienced. And we took some lumps that year.

“We wound up like 19-10 and got beat in the area consolation finals for a trip to go and ever since that, they’ve been really wanting to get back and reach that ultimate goal of winning a state championship.

“We’ve been to the semifinals two years in a row since then and just had some bad luck. And I hope we have a better opportunity this year.”

Hannah Ash, Dani Manning and Taylor Thompson make up this year’s senior class. They are leading a group that is playing, not as individuals, but as a team, according to Forsythe.

“And I think if you watch us play, you can tell we’re pretty unselfish with the basketball. We share it well and I think that’s what makes us who we are. And I also know that we’re blessed in the fact that, really, all five girls that are on the court for us know how to score. And that helps with that.” 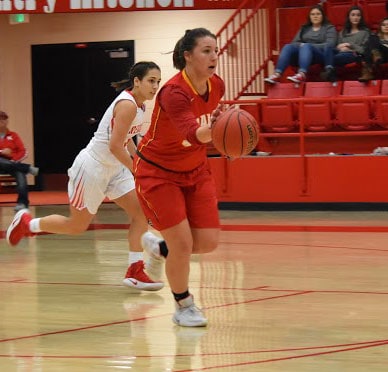 Dale’s Dani Manning looks ahead after pulling down a rebound. Photo by Vicki Droddy.

Forsythe said he does let his team look back some, but he knows the girls are also pushing forward for the potential of a bigger prize.

“Winning the Bertha Teague back-to-back was a big thing. And that’s something we talked about.

“These seniors have lost only six games in the last couple of years. And so that’s an accomplishment because our schedule is so tough. My goodness, I know I keep going back to that. But we talk about it. I bring that to these girls’ attention. ‘Girls, you’ve beaten three No. 1’s and all these state champions that were in the Bertha Teague.’ We talk about those things a lot. And it’s something to be really proud of.”

But there is still one more thing.

“Last year, we won a lot of games, and beat state champions and won the Bertha Teague, but we didn’t accomplish our overall goal. And I still want them to understand that that was a special year also. But that’s hard to do, because they have their sights set on something bigger.

“Until you reach that final goal, there’s always something to strive for and it’s always in the back of your mind and it’s easy for these girls to get lost in what they have done because they’re so focused in what they want to do.

“And that’s what they have to keep them going right now.”

Dale quest to meet that final goal continues Tuesday night at Preston. And it’s only fitting that No. 4 Preston is a top-five team.

There is never an easy night for the Lady Pirates. And that is a big part of what keeps them successful.