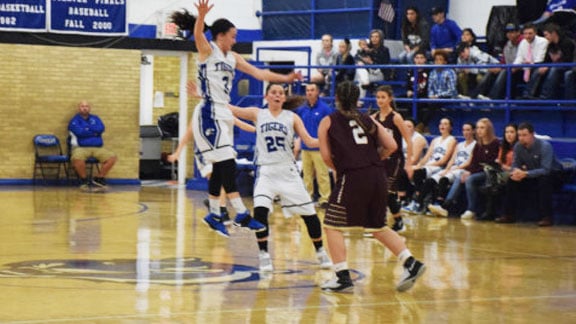 On Tuesday, Union City hosted its first home game of the season and got the W with a 70-21 win against Verden.

The Lady Tigers came out strong and built a lead of 11-0 in the first quarter. They took control of the game and didn’t look back as they led the entire game.

Union City brought in many off the bench due to the first five gaining unwanted fouls. At the end of one quarter, UC built a 12 point lead, 21-9.

The second quarter was much like the first with the Lady Tigers outscoring Verden, 15-7. Sophomore Hunter Johnson led the scoring for the ladies with five points in the second quarter, followed closely by seniors Julia Reyor and Morgan Englebretson with four each.

Union City held the lead at 36-16 going into halftime.

The Lady Tigers came out with momentum going on a 17-0 run pushing Union City to a further lead. Englebretson ran the third quarter with a total of seven points, trailed by senior Kennedy Sepulvado with six. UC put a halt to Verden’s offense, not allowing it to score a single point.

Coach Anderson utilized the bench, as all players got in the ballgame and contributed to helping the Lady Tigers get their first win of the season.

The fourth quarter was comparable to the others as Union City propelled past Verden. Senior M’kynna Woods, who was recently released to play, joined the Lady Tigers on the court. She contributed five points to get the Tigers fans fired up.

This story was first published on gouctigers.com and was republished with permission.