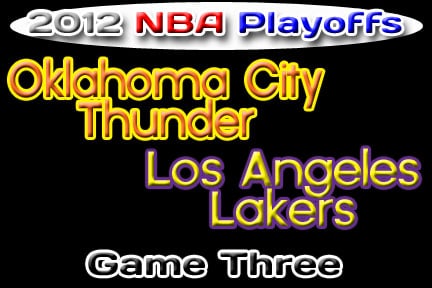 The Thunder went into Game Three on Friday night with a perfect postseason record, but left with their first loss after the Lakers got a desperately needed win with a final score of 99-96.

It was not a typical playoff game.  As a team, the Thunder was called for 30 personal fouls that resulted in 42 Laker free throws.  The teams combined to shoot 67-70 from the stripe.  Two of those Laker free throws came at a critical point with just nine seconds left.  Kobe Bryant made both of his shots to put put the Lakers ahead by three after Kendrick Perkins had brought OKC back within one on the previous possession.  The Thunder failed to make the shot that could send the game to overtime, and the Lakers managed to take the series to 2-1.

Kobe Bryant had 36 points in the game, half of which came from free throws.  For the Thunder, Kevin Durant led the team with 31 points, followed by Russell Westbrook and the Sixth Man of the Year, James Harden, who each had 21.  Defensively, Kendrick Perkins and Serge Ibaka combined for seven of the team’s nine blocks, and six Thunder players contributed to the team’s 11 steals.

The game’s physical play resulted in three technical fouls.  Two of those came when Russell Westbrook and Metta World Peace were grappling over a loose ball.  The referees gave each player a T, and later Kendrick Perkins received one as well.  If this type of play continues, the rivalry between these two teams will likely only intensify in the years to come.

Ultimately, the Thunder’s effort fell just short.  They will not have much time to let the loss sink in with game four coming up in less than 24 hours.  OKC will try to take a two-game lead in the series before heading back to the Chesapeake Energy Arena when the team faces off with Kobe’s Lakers again on Saturday night at 9:30 p.m. (CST).