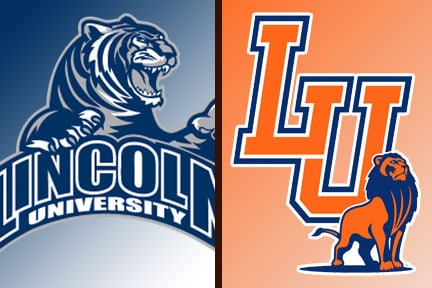 Lincoln never trailed in Saturday’s season opener at Langston and avenged last year’s one-point loss with a 35-32 win on the road.

The Blue Tigers (1-0) got on the board first on a two-yard touchdown run by Keith Lakey. But the lead was short-lived.

Langston’s Sheldon Augustine ran back the ensuing kickoff 100 yards to tie things up at 7-7.

The two teams traded touchdowns twice more through the first half, before Lincoln started to pull away in the third. A missed extra point on the second touchdown for Langston was the difference on the day as the Lions couldn’t complete two-point conversions after that to make up the difference.

Lincoln was up 16 points midway through the quarter on Owen Jordan’s fourth touchdown pass of the day.

But again Langston (0-1) would not go quietly away.

Junior quarterback Mark Wright, Jr. had his second touchdown run on the day late in the third and then in the fourth connected with Deandre Washington to pull the Lions to within three at 35-32.

Wright was 27-of-49 passing on the day for 258 yards, with two touchdowns and two interceptions. The final one was costly.

Langston’s defense held through the fourth, but the offense just couldn’t convert and on the last possession, Wright’s pass was intercepted with 23 seconds remaining to stop the rally.

The win was the 250th in school history for the Blue Tigers.

Langston next travels to Bethany College on Saturday, Sept. 12.