Langston holds on to win season opener at Southwestern Christian 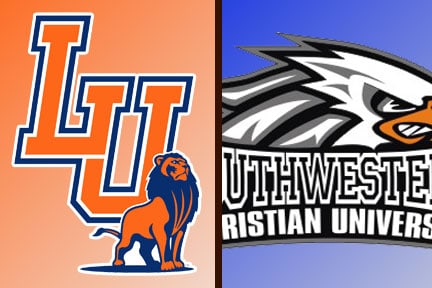 The 24th ranked Langston Lady Lions opened 2014-2015 with a win at Southwestern Christian.   But they had to play the full 40 minutes to get it done.

Senior Lynette Holmes, last year’s NAIA scoring champion, led the way with 12 points, but was just 3-of-7 shooting from the field.

Juniors Lulu Perry and T’Keya Mason were also in double figures scoring with 11 and 10 points, respectively.

New Langston coach Cheryl Miller was on the bench for the first time in a regular season contest leading the Lady Lions and she spoke about the team’s performance on opening night.

“Obviously, we didn’t shoot the ball well,” Miller said.  “I guess the biggest disappointment for me was that we’ve been training so hard and have formed our identity at the defensive end and that was non-existentent.  We went away from everything that we have been preparing for.”

Langston took double-digit leads on SCU in each half, but the Lady Eagles were able to come back each time.

The Lady Lions were up 22-8 with 7:55 remaining in the first half, but big three-pointers from Lydia Ross and Andi McGill helped the Lady Eagles make a run to get SCU within two, 28-26, at the intermission.

Langston had a similar lead, 47-37, less than eight minutes into the second half.  A three-pointer from Eliora Johnson started a 20-9 run, giving the Lady Eagles a 57-56 lead with 2:04 remaining.

“I thought Southwestern Christian did a great job of really just hanging around and gaining their confidence,” Miller said.  “And you know basketball, if you get a big lead on a team, you need to bury them.  If you keep that door open long enough, and they keep knocking, eventually they’re going to get close.  And they had a great opportunity to win the game.”

Neither team hit well from the field near the end.  SCU made the only field goal in the final 4:38.

Trailing 57-56, Langston made four free throws at the end, three from Holmes, and took the win.

Miller said there is much to be done.

“We have a lot of things to work on and a lot of film to digest today,” Miller said.  “Tomorrow we’re going to go hard and clean up a lot of stuff.

“The positives are that we got a win and it was on the road, so we just have to move forward.”

Sophomore Adrianna White had a game-high 17 points and five rebounds.

LU out-rebounded SCU, 51-34, a stat that was not surprising to Miller.

“But with that being said, we didn’t do a good job of boxing out and making that really a part of our staple, which we’ve been working on since we’ve been able to roll the ball out onto the court.”

There was a lot of traffic on and off the Lady Lions’ bench and 11 players saw court time.  Miller said the rotation will start to become smaller, but that she and her staff are still making decisions.

“Right now, there’s a big question mark.  I can’t honestly and definitively say that we have a starting five that we know we’re going to play every night.  That’s a challenge for our staff and that will be a challenge for our players and again we just have to move forward.”

Langston hosts Lindenwood-Belleville in its home opener on Wednesday, Nov. 5, at 6 p.m.