Langston picks up road win at No. 1 Mid-America Christian 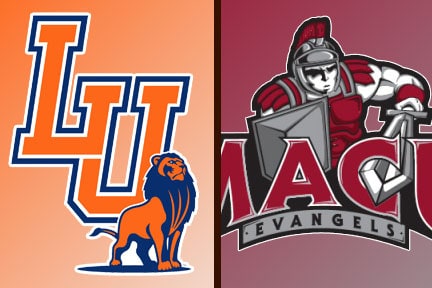 OKLAHOMA CITY — The Langston University Lions came into the Gaulke Activity Center and gave the No. 1-ranked Mid-America Christian University Evangels their first loss of the season, 89-75, on Tuesday night.

It was a wire-to-wire win for the Lions, who scored the first five points of the game and promptly opened a double-digit lead of 12-2 four minutes into the contest.

After a bucket from Tyler Chaisson and three by Jordan Rhodes crept the Evangels within five, the Lions, which proved to be the theme throughout the game, answered with consecutive scores to push the lead back to nine.

Langston stretched the lead to as many as 15 in the opening half, but the Evangels closed the half strong, as a three by Olajuwon Garner capped a 12-4 spurt over the final 4:20 to bring the Evangels within 40-35 at the break.

Chaisson then opened the second half with a three-point play that cut the deficit to just two points, the closest the Evangels had been since the opening 15 seconds of the game.

The Lions would again keep the Evangels at bay when Curtis Jones scored the first five points of a 6-0 run that built the lead back to eight.

The Evangels could get no closer than six the rest of the way, with the last time coming on a jumper by Robert Romero that made it 69-63 with 4:04 left.

But the Lions put in the final dagger by scoring seven straight points to take a commanding 13-point lead of 76-63 with just 2:40 left.

Chaisson led the Evangels with a career-high 22 points, followed by a career-best 17 from Romero. Seaton pulled down a team and career-high 13 rebounds for MACU.

Devonse Reed also scored in double-figures for the Evangels (3-1) with 14 points and also had nine boards.  Malcolm Mann produced a game-high eight assists.

Jones fueled the Lions (4-1) with a game-high 31 points and Myles Eglin scored 22. Terrell Jones recorded a double-double of 10 points and 11 rebounds.

The Evangels held a 45-32 edge in overall rebounding, but were badly hurt by 23 turnovers, compared to only 10 giveaways by the Lions. MACU also shot only 23.8 percent (5-of-21) from the perimeter.

MACU will look to get back on the winning track Friday evening (Nov. 18) at home against Haskell Indian Nations University. Tip-off is set for 6 p.m.