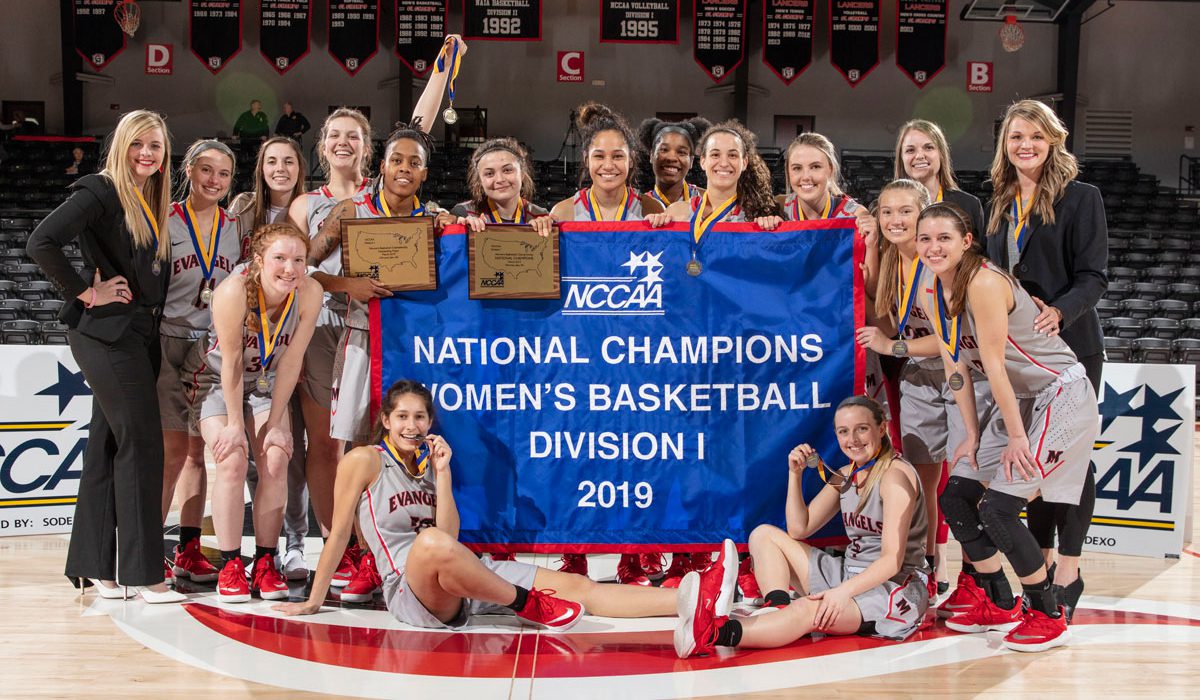 WINONA LAKE, Ind. – It wasn’t easy, but for the first time since 2011, the National Christian College Athletic Association (NCCAA) has a repeat women’s basketball National Champion.

After the game, coach Hannah Moeller said of the performance, “We are extremely proud of what our group accomplished this week and this season. Specifically, I am so happy for the seniors for their careers to end this way. It was a blast to coach these women this year, and I’m so proud of how they’ve represented our program, our university, and most importantly, the Lord.”

MACU opened the game with four straight points, but the Evangels struggled in the first quarter after that. BPC clawed their way back and claimed the lead at 15-14, and the Barons closed the frame on a 13-6 run that helped BPC take a 28-20 lead after 10 minutes of play.

The Evangels turned up the heat in the second frame, however. MACU made four buckets in the first 1:09 of the period, with two coming from junior Alexis Shannon, and that ignited a 16-0 run to start the quarter as MACU surged out to a 36-28 lead. Shannon scored eight of the 16 points in that spurt, and the Evangels out-scored BPC 23-12 in the frame. The Barons did manage to rally late in the period, though, and MACU held a 43-40 lead at the break.

BPC took the lead early in the third period, but the quarter proved to be a back-and-forth affair. The lead changed hands five times in the frame, and with 3:41 to play, Loralei Siliga scored to put MACU up 55-49, and it appeared that the defending champions might be on their way to opening up the lead. That was not the case, though, as BPC closed the period on an 11-2 run and with 10 minutes to go in the game, The Barons led, 61-57.

BPC led for much of the early part of the final frame, but with 7:32 on the clock, MACU caught a break in an unusual way. The game was delayed for approximately 25 minutes for a medical emergency, and the teams were sent to the locker rooms. That allowed Moeller and her staff one more opportunity to make late game adjustments, and while they didn’t pay off right away, the Evangels stuck to the plan.

After the delay, and a brief wram up period for the teams, BPC hit a 3-pointer to stretch their lead to seven at 70-63, but Nevada Denton answered with a triple of her own at the 6:51 mark of the period – MACU’s first long distance make of the game – and the deficit was trimmed back to four points.

The Barons continued to lead, however, and BPC took advantage of some MACU missed shots and turnovers to push their edge to eight at 78-70 with 4:08 to play.

That’s when the Evangels started to rally. Consecutive scores from Ossyana Ozoani and Shaylan Coleman cut the lead to 78-74. After a made free throw from BPC’s Alexia Galloway, MACU got another 3-pointer from Jessica Fairley to cut the deficit to 79-77. Ozoani scored moments later to tie the score at 79, and Fairley nailed a dagger of a triple with only 35 ticks left to put MACU up 82-79 and cap a 12-1 run.

Galloway scored with 26 seconds left, but over the waning seconds, MACU made 5-of-6 free throws to seal the win, and despite a BPC buzzer-beating 3-pointer, MACU claimed their second straight title, 87-84.

Coleman finished tied for the game-high with 21-points, eight rebounds, five assists, and seven steals in the game; and she took home tournament Most Outstanding Player honors. The senior point guard from Dallas, Texas 19.3 points per game in the tournament, while she also pulled down 6.7 rebounds per game, dished out 14 assists, and racked up 13 steals.

“Shay was unbelievable this week,” Moeller said of her floor general. “Her performance Thursday night against Grace is one of the single best individual performances I have ever seen at the small college level. To watch her be able to follow it up with a terrific championship game and be rewarded with the MOP award was really special.”

Shannon also had 21 points in the game, and she earned a place on the All-Tournament team with an average of 24 points and 9.7 rebounds per game over the three contests. Shannon also eclipsed the 1,200 point mark in the game in only her second season at MACU.

Ozoani had a double-double with 10 points and a team-leading 10 rebounds as well.

Perhaps the two biggest shots in the game, though, were the two late threes from Fairley, and that was not lost on Moeller.

“Jess’s back-to-back threes were obviously of paramount importance in our ability to get over the hump and come out with a win,” Moeller noted of the Choctaw native. “She’s a kid who really, really loves basketball. She wants to be good and she fights extremely hard for everything she gets. Those were two extremely huge shots, and she’s earned the right to take and make them in that big of a spot.”

The win sends out MACU’s three seniors – Coleman, Jennah Coffman, and Darby Price with a championship, and the win sets the MACU single season wins record for the third straight season.