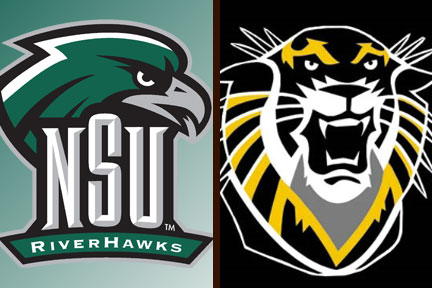 The visitors came out strong and turned an FHSU turnover into an early touchdown. After punting on its first possession, Northeastern State forced an FHSU fumble on its first play from scrimmage. NSU then went on a 13-play, 66-yard drive that ended in a seven-yard rushing touchdown by senior running back Joel Rockmore. The touchdown came two plays after the Tigers blocked a field goal attempt that was recovered for a first down by junior guard Lance Cox.

Fort Hays State answered with a 36-yard field goal from Drew O’Brien late in the opening quarter after a pair of punts.

After a failed fourth down try early in the second quarter, the RiverHawks drove 52 yards for another score. Junior quarterback Kevin Pantastico connected with junior wide receiver Jamari Pope for a nine-yard score, but the extra point was blocked.

Fort Hays State then ended the half with another O’Brien field goal following a 12-play, 88-yard drive that took the final 4:02 of the second quarter. NSU took a 13-6 lead into halftime, marking the first time since 2013 that the green and white held a halftime advantage.

The Tigers tied the game on a 10-yard rush from Derek Kendall-Campbell four minutes into the second half, and then they took the lead for good on a 93-yard carry from Shaquille Cooper with just 2:19 left in the contest.

The RiverHawks had the ball in Fort Hays State territory on each of their previous two possessions prior to the game-winning rush, but a blocked field goal and a sack halted both drives.

Pantastico finished 23 of 44 for 192 yards passing and one touchdown. Rockmore had 86 yards rushing on 22 carries and his first rushing touchdown since midway through last season. Senior wide receiver Garrett Powell posted eight carries for 100 yards, and he also had six punts for 202 yards.

FHSU quarterback Treveon Albert was just 6-for-14 passing for 37 yards, but he added 58 yards rushing on 11 carries. Cooper finished with 263 yards rushing on 29 carries and the late game-winning score. Kendall-Campbell scored twice and contributed 60 yards on the ground on 10 attempts.

Northeastern State returns home for a 2:37 p.m. kickoff Sept. 19 against Missouri Western State. The game will be shown live on the MIAA TV Network and will be featured as the MIAA Game of the Week.