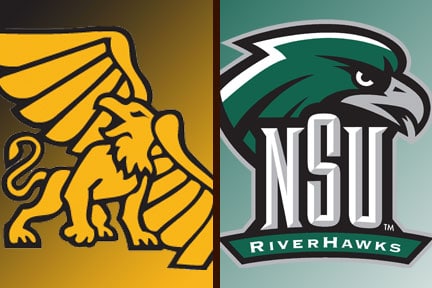 The contest was featured as the MIAA Game of the Week and was broadcast live on the MIAA Network.

The RiverHawks (0-3, 0-3 MIAA) led for most of the game, but two scores on back-to-back plays from the Griffons (2-1, 2-1 MIAA) with less than six minutes remaining would be all the visitors would need to escape with the come-from-behind victory.

The game-winning score for MWSU was also the sixth and final turnover by NSU. Donte Watkins scooped up a fumbled pitch attempt and took the ball the final 14 yards. The last points of the game came at the 5:50 mark of the fourth quarter, which was also just nine seconds after the Griffons tied the game on a 21-yard Skyler Windmiller pass to Brandynn Clark.

The score was the first passing TD the RiverHawks have allowed this season.

Missouri Western State got on the board first when Tanner Pettet connected on a 20-yard field goal midway through the first quarter.

Northeastern State responded with a two-yard rush from junior quarterback Kevin Pantastico at the 13:42 mark of the second quarter. Raphael Spencer plunged into the endzone two minutes later to give the lead back to MWSU, but less than two minutes after that Pantastico connected with junior wide receiver Antonio King for 63 yards to give NSU the 14-10 edge.

The score was King’s first-career TD and the longest pass play of Pantastico’s career.

After neither team scored in the third quarter, the RiverHawks were able to stretch their lead out to 17-10 when junior Eddie Garcia connected on a 26-yard field goal early in the fourth.

NSU was able to hold its lead until the final two scores with less than six minutes remaining.

MWSU outgained NSU 428-215, including 302-106 through the air and 126-109 on the ground. The contest featured nine total turnovers. NSU had six (five interceptions, one lost fumble) and MWSU had three (all interceptions).

Pantastico did not start the contest but finished 7 of 27 for 106 yards and one score. Senior running back Joel Rockmore carried the ball 14 times for 69 yards.

Northeastern State will now travel to Emporia, Kansas, for a 2 p.m. kickoff Sept. 26 with Emporia State.