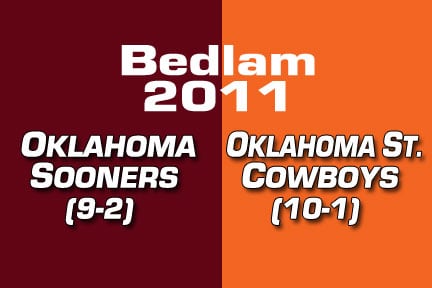 Now that Oklahoma has taken care of business with the 26-6 win over Iowa State, the talk about Bedlam 2011 can actually begin.

Let the talk begin about whether the Cowboys’ defense can stop Blake Bell within five yards of the endzone.

Let the talk begin about how difficult it will be for OSU to regain the momentum it lost in Ames.

Let the talk begin about who will step up in the big game with the absence of Broyles and Whaley.

Let the talk begin about why this year should be any different than any other for Cowboys’ fans to have a reason to think the Pokes can win.

Let the talk begin about who should get a BCS bowl bid, no matter which team wins.

Now that the week is upon us, let the talk begin.  All this talk of renaming Bedlam was not only premature, it turns out to be unnecessary.  In fact, the two teams will come into the contest with the same records they had when they met in 2010.  The rankings will be a little higher, but following the Alabama win, a shot at the national title will most likely not be on the line.

The stakes are still very high.  A conference championship will still be determined as to whether it is shared or owned outright.  State pride is on the line.

And now, and not until now, the time has come to start talking.