Lions and Warriors are ready to get on the field 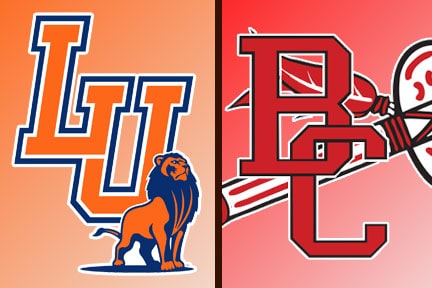 It is a date that has been circled on the calendar in Langston and Muskogee for a long time.

A conference title and like a trip to the NAIA playoffs will be on the line on Saturday when Langston travels to Bacone for a matchup of two programs that have been on a collision course for small college supremacy in football in 2013.

And each school has done its part to get to this point, though there were likely some fans around both campuses that got a little nervous.

And with those ‘trap games’ aside, each school is ready and the coaches are glad that game week is here.

“It’s definitely exciting,” said Bacone coach Mark Rubly.  “I know (this game) was on the kids’ minds some last week.  And the coaches reminded them to focus on each game.”

But he said he knows the game on Saturday is a big one and that it is a privilege to be playing in a meaningful game.

“I’m glad we’re in the position we’re in,” Rubly said.  “This is the second year in a row that we’re playing for something in November.

“Last year, we didn’t quite get it done, but we have another opportunity this year.  Langston is a very good football team.  They lost to only Division I football teams.  They’re going to come in here and give it everything they’ve got.”

The Lions are on a roll since getting through the brutal opening to their schedule – four NCAA DI schools and all on the road.  LU has rattled off four consecutive wins since then.

But the Warriors have done their part to be here, riding a five-game winning streak and owing one of their early season losses to a DI program, as well.

Bacone has been in the NAIA rankings for the last three weeks and is at No. 22 this week.  But Rubly doesn’t let his team focus on that.

““It’s not really something that I talk about,” Rubly said.  “If I hear the kids talking about it, I’ll say that it really doesn’t mean anything until the end of the year.  Once the season is over after we play our game this week and then go down to SAGU and play our last game, then we’ll see what happens after that.

“If you start getting into ranking and worrying about that, then you’re obviously not focused on the next opponent and the next game.  We need to be 100 percent focused and 100 percent committed to the game at hand.  All that stuff will take care of itself.”

“I think it might be some more motivation for Langston thinking, ‘We’re the ones that have won the CSFL and we’re winning consistently in the NAIA.  Why aren’t we ranked?’  It might be a motivation factor for them.

And the Warriors have done just that at home during the last two seasons.  Bacone is 9-1 at the Indian Bowl since the field was renovated.  Rubly said he recognized the significance.

“Definitely I think we do have a home field advantage,” Rubly said.  “We’ve put a stamp down since we have the new turf and let’s start a new tradition.  The kids really bought into it and we’re playing really well.”

Bacone’s opponent this week is a team that seems to have found its stride, according to Langston head coach Dwone Sanders.

“We’re gelling,” Sanders said.  “Now that we’re in conference, the playing field has leveled.  I’m very excited about the way the kids have been performing.  They’ve been doing what we’re asking them to do.”

And the Lions are maturing as they go.

“Offensively, we’re learning how to close games.  We had a tough game last week against OPSU, and the offense stepped up when we needed them to step.”

Sanders said that fans that enjoy a high octane level of play would appreciate what his team is doing.

Much of the firepower revolves around the play of newcomer Mark Wright, Jr.  The quarterback took over as the starter in Week 3 and is passing for more than 240 per game and has completed 67 percent of his passes with six touchdowns during the Lions’ winning streak.

“He’s doing what’s expected of him,” Sanders said.  “We’ve trained him to do this and he listens well.  He’s a fine kid and he’s getting better week in and week out.

“And he can only grow.  He’s a redshirt freshman and we’re excited about having him for the next three years.  We just want to stay the course with him.”

Wright has been tabbed the CSFL Offensive Player of the Week each of the last two weeks.

And although the game is in Muskogee this year, Sanders said he knows his team can handle playing on the road.

“There’s a home field advantage for them, but we’ve played on many home fields.  We’ve learned to play on the road so well that it won’t really bother us like it might bother most.”

That is maybe an understatement for Sanders, as this will be the seventh road contest for Langston in 2013.

But he went to stress the confidence he has in his team.

“We’re the three-time defending champs and our kids know how to win the big games in this conference.  We find a way, we always do.  We had a rough time against Panhandle and our kids found a way.

“They just believe that this conference belongs to them.  And until someone decides to beat us or has the capability to do that, we’ll continue to do that.”

Rubly echoed the sentiment from the other side of the ball.

“We’ve talked about it and about being a rival, and to be a rival, you’ve got to win once in a while.  And we’ve had some close games with them the last couple of years, but we just haven’t gotten over the hump.

“As coaches and players, we’re hoping this is the year.”

The day is almost here.  And teams and fans know what is on the line.

The matchup between the Lions and Warriors gets underway tomorrow at the Indian Bowl in Muskogee at 2 p.m.